40 years ago today, the comedy film Airplane! premiered. Written and directed by David and Jerry Zucker, along with Jim Abrahams, it won Golden Globe nominations and starred Leslie Nielsen, Robert Stack, Lloyd Bridges, and Peter Graves. A perfect parody of the disaster film genre—particularly the drama Airport 1975—Airplane! is a fast-paced slapstick comedy, with visual and verbal puns, gags, and obscure humor.

The film’s reputation has grown substantially since its release, and was marked for preservation by the United States National Film Registry at the Library of Congress as being “culturally, historically, or aesthetically significant.” WATCH a few scenes… (1980)

The plot revolves around civilians trying to land a jet plane after an in-flight meal causes food poisoning and the pilots are incapacitated. The above photo shows the plane’s autopilot, a large inflatable pilot doll named “Otto”, which might be able to get them to Chicago, but cannot land the plane.

And, Happy 73rd Birthday to Larry David, head writer and co-creator of “Seinfeld.”

Starting with a history degree from the University of Maryland, the Brooklyn-raised comedian went on to Seinfeld fame and later wrote and starred in HBO’s “Curb Your Enthusiasm”. That show’s seventh season featured the cast of Seinfeld returning in a story arc involving Larry’s attempt to organize a Seinfeld reunion TV special. (1947) 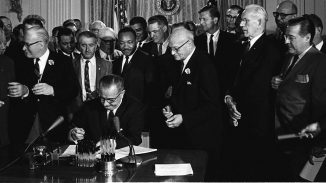 On this day in 1964, the landmark Civil Rights Act of 1964 was signed into law by U.S. President Johnson outlawing all segregation on the basis of race. The legislation, first proposed by President Kennedy, would protect constitutional rights and outlaw discrimination based on race, color, religion, sex, or national origin. It prohibits unequal application of voter registration requirements, and racial segregation in schools, employment, and public accommodations.

And, on this day in 1971, Brian May, Roger Taylor, John Deacon, and Freddie Mercury performed their first show together as Queen. 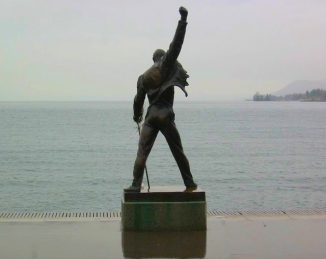 It was Mercury who suggested the band’s name, and created the logo which combined the members’ zodiac signs and appeared on all the Queen LPs. (Click to enlarge the photo of Freddie Mercury statue on Lake Geneva, Switzerland by S Werner, CC) 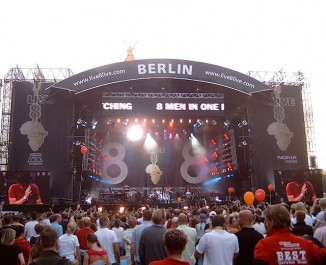 And on this day in 2005, Live 8 Concerts rocked 10 cities, including London, Philadelphia, Paris, Berlin, Johannesburg, Rome and Moscow, designed to put pressure on G8 countries to address poverty and debt in Africa.

Hundreds of millions of people saw the Bob Geldof-produced events in person, on TV, or online. As a result, five days later, the G8 leaders pledged to double levels of aid to poor nations from $25 to $50 billion by the year 2010. Included in the all-star line-ups were Pink Floyd, (reunited with former bassist/vocalist/lyricist Roger Waters for the first time in over 24 years), U2, Paul McCartney, Madonna, Chris Martin, Dave Matthews, Stevie Wonder, Will Smith, and Robin Williams–covering Queen’s We Will Rock You. DVD sets are available online.