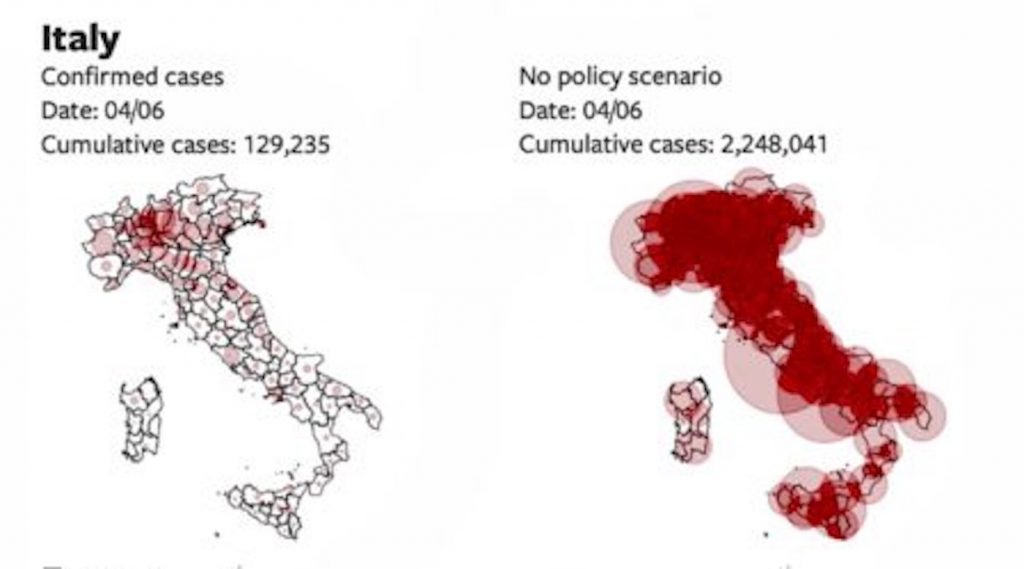 This week, scientists from Imperial College London and University of California–Berkeley both published studies on the impact of emergency health measures across 17 different countries.

Although the teams used different methods of calculation for their research, they both came to similar conclusions: millions of lives have been saved thanks to large-scale interventions during the pandemic.

According to the Imperial study, European lockdowns helped to prevent more than 3.1 million deaths. The Berkeley study—which examined infection rates and lockdown measures in China, South Korea, Italy, Iran, France, and the US—found that local and national interventions prevented more than 530 million cases. Both of these studies were published in Nature.

CHECK OUT: Thousands of Young Adults Are Volunteering to Catch COVID-19 to Save Others in the Future

Furthermore, continuation of these policies beyond the study period have likely avoided many millions more infections, says Solomon Hsiang, director of Berkeley’s Global Policy Laboratory and lead author of the Berkeley study.

“The last several months have been extraordinarily difficult, but through our individual sacrifices, people everywhere have each contributed to one of humanity’s greatest collective achievements,” Hsiang said. “I don’t think any human endeavor has ever saved so many lives in such a short period of time. There have been huge personal costs to staying home and canceling events, but the data show that each day made a profound difference. By using science and cooperating, we changed the course of history.”

The Berkeley study evaluated 1,717 policies implemented across the 6 countries during the period extending from the emergence of the virus in January to April. The analysis was carried out by Hsiang and an international, multi-disciplinary team at the Global Policy Laboratory, all working under shelter-in-place restrictions.

Recognizing the historic challenge and potential impact of the pandemic, “everyone on our team dropped everything they were doing to work on this around the clock,” said Hsiang.

Today, global cases are nearing 7 million—but the UC Berkeley research suggests that the toll would have been vastly worse without policy interventions.

“So many have suffered tragic losses already. And yet, April and May would have been even more devastating if we had done nothing, with a toll we probably can’t imagine,” Hsiang said. “It’s as if the roof was about to fall in, but we caught it before it crushed everyone. It was difficult and exhausting, and we are still holding it up. But by coming together, we did something as a society that nobody could have done alone and which has never been done before.”

Meanwhile in London, the Imperial team examined COVID-19 death rates across a dozen European countries after various stay-at-home orders, social restrictions, and shutdowns were implemented back in March.

Measuring the effectiveness of these interventions is important, given their economic and social impacts, and may indicate which courses of action are needed in future to maintain control. Estimating the reproduction number—the average number of cases an infected person is likely to cause while they are infectious—is a particularly useful measure.

“Using a model based on data from the number of deaths in 11 European countries, it is clear to us that non-pharmaceutical interventions– such as lockdown and school closures, have saved about 3.1 million lives in these countries,” said Dr. Seth Flaxman, study author from the Department of Mathematics, Imperial College London. “Our model suggests that the measures put in place in these countries in March 2020 were successful in controlling the epidemic by driving down the reproduction number and significantly reducing the number of people who would have been infected by the virus SARS-CoV-2.”

LOOK: Optimistic COVID-19 Statistics For Vast Numbers of US States Reported For May

Additionally, the team calculated that the reproduction number has dropped to below one as a result of the interventions, decreasing by an average of 82%, although the values vary from country to country.

“This data suggests that without any interventions, such as lockdown and school closures, there could have been many more deaths from COVID-19,” said Dr. Samir Bhatt, study author from the MRC Centre for Global Infectious Disease Analysis at Imperial College London. “The rate of transmission has declined from high levels to ones under control in all European countries we study. Our analysis also suggests far more infections in these European countries than previously estimated. Careful consideration should now be given to the continued measures that are needed to keep SARS-CoV-2 transmission under control.”