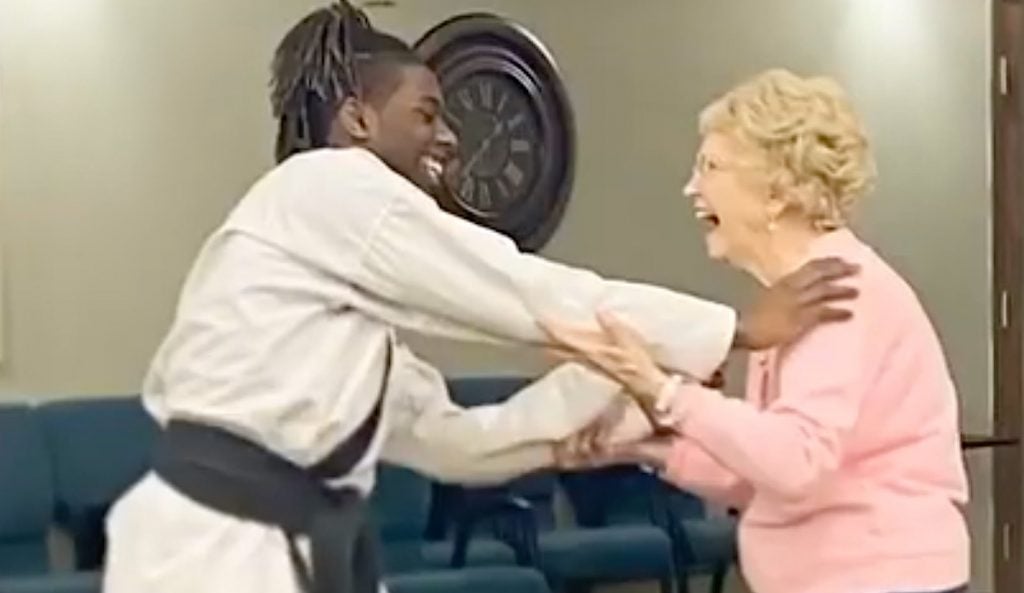 This young karate teacher hopes his YouTube channel is more contagious than the current pandemic—because he wants to keep seniors active, even if they’re stuck inside.

Jeffrey Wall just turned 15, yet he is the founder of Golden Age Karate, an outreach program he began last October to teach seniors at the Friendship Village nursing home in his hometown of Dayton, Ohio.

Then, two days before the final class, the shelter-in-place order came down from the Ohio governor halting his personal fitness crusade for the elderly—or did it?

Wall began studying karate at the age of six and, just four years later, was inducted into the USA Martial Arts Hall Of Fame. He earned his black belt at age 13 and—like his personal journey—his dedication to students is unwavering.

“I knew that they would be super disappointed,” Wall said of the new quarantine.

So he started a YouTube Channel to help them keep up their lessons. Now younger students are taking the classes, too—and the love he shows his seniors is spreading.

In fact, many of Wall’s Instagram followers are making ornaments and crafts to help decorate the walls of the nursing home on a future visit.

RELATED: Kidnapper Got More Than He Bargained for When He Chased Woman into Karate Dojo

Before the pandemic began, each hourlong class would attract between 5-10 residents in their golden years—and they didn’t come just to watch.

Wall used demonstrations in the beginning so his seniors would know what to expect. His first example was showing how he does push ups on his knuckles—a good way to take the pressure off your wrists. Suddenly he saw students aged 90 and older on the floor doing pushups alongside him.

“My mom and I tried to help them up, but they wanted to keep going,” he told Good News Network. “One 95-year-old student did 10 pushups in her nice sweater and pearls and she did great! We laugh about that at every class.”

Wall also has a personal client who is 90 and reminds him of his own grandmother. Her soft voice and gentle nature can’t hide her enthusiasm. Before the quarantine she never held back when throwing punches at the target pad, especially when Wall would encourage her to let loose. But at the end of a lesson she would always ask, “That’s not too hard is it?”

“It has never been too hard,” Wall told GNN, “but I always told her, ‘Just a little,’ and she would laugh.”

Before classes stopped, she had six months of perfect attendance. Wall was planning to promote her to a yellow belt.

Videos on YouTube reveal the enthusiasm that Wall’s students bring to each session. Wall holds the target pad and encourages each student to fire punches while seated in a chair. In the video below, one white-haired lady landed a series of seated kicks so hard that he jokingly reminded her not to break the target.

Wall’s growing popularity has led to requests from nursing homes outside of Dayton. His present desire is to stay in his community. However when the shelter-in-place order is lifted, he is willing to consider branching out.

“I hope that I can help in different cities,” Wall said, “and eventually countries.”

SHARE the Online Opportunity With Kids and Elderly on Social Media…