245 years ago today, American Founding Father Patrick Henry spoke to Virginia legislators, where he famously proposed that their colony should join the revolution against King George and fight for independence. “I know not what course others may take, but as for me, give me liberty, or give me death!”

Thanks in part to Patrick Henry’s persuasion, the resolution passed by a narrow margin with two future U.S. Presidents voting in the affirmative—Thomas Jefferson and George Washington. (1775)

And, on this day in 1994, Wayne Gretzky broke one of hockey’s greatest records—most all-time goals for a player. Widely regarded as the greatest player ever to carve the ice, he overtook his role model, Gordie Howe, when he scored his 802nd career goal, on the way to scoring 894 goals in 1,487 games before retiring five years later. WATCH the moment…

Also on this day, in 1972, the film The Concert For Bangladesh, featuring George Harrison, Bob Dylan and Eric Clapton, premiered in New York. The featured event had been the first high-profile benefit concert in world history. The musicians raised more than a quarter million dollars in one night for Bangladesh relief. Sales of the album and DVD continue today to benefit millions to the George Harrison Fund for UNICEF. 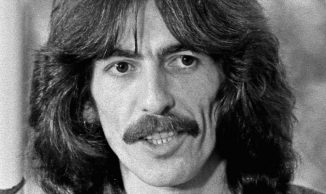 Harrison had never played by himself in front of a large audience before, but his friends’ participation buttressed his enthusiasm. The video clip below was produced in 2011 to commemorate the 40th anniversary of the 1971 concert in Madison Square Garden. By 1985, revenue raised from the live album–a boxed three-record set–and film, which is still on sale today, totaled an estimated $12 million –all donated to UNICEF’s work in the once war-torn East Pakistan region. WATCH a highlights clip with interviews.