Happy 70th Birthday to Juilliard-trained actor William Hurt. After making his film debut in the 1980 sci-fi film Altered States, for which he won a Golden Globe nomination, he starred with Kathleen Turner in the neo-noir movie Body Heat. He soon won an Oscar for Best Actor, in Kiss of the Spider Woman—and received two Academy Award nominations for his lead performances in Children of a Lesser God (1986) and Broadcast News (1987, below left).

Often appearing on stage, Hurt won his first Tony Award nomination for Hurlyburly. He earned his fourth Academy Award nomination for A History of Violence and won acclaim in Syriana, Mr. Brooks, and (my favorite) The Big Chill. In 2013 he was diagnosed with terminal pancreatic cancer, but got an alternative treatment in 2018 that Hurt says saved his life. WATCH some film highlights… (1950)

And on this day in 1916, Albert Einstein published his “General Theory of Relativity” with a German scientific journal, after wrestling with it for nearly a decade. 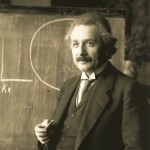 He finally provided the answer to a scientific problem about the relationships between space, time, matter, energy and gravity, and totally changed Newtonian physics in the process. As a consequence of Einstein’s equations, it became clear that time and space comprise a single continuum, whose shape can be bent or warped by gravitation. (Read more)

Happy 98th Birthday to comedian / actor and writer Carl Reiner. From the Dick Van Dyke Show (which he created and wrote for) to a famous comedy bit, 2000 Year Old Man, Reiner collected 12 Emmys over 70+ years—and is still working today. Born in The Bronx, he is the father of actor–director Rob Reiner and best friends with Mel Brooks. In 2000, Carl was honored with the Mark Twain Prize for American Humor. The next year, he played Saul in Ocean’s Eleven, and later in the Ocean’s series—and published his memoirs. WATCH the tribute… (1922)