40 years ago today, a young man named Terry Fox began his heroic Marathon of Hope across Canada. In St. John’s, Newfoundland, standing on an artificial leg, he touched his foot into the Atlantic Ocean and began his run hoping to complete a marathon every day until he reached the Pacific coast.

An active teenager, Terry was involved in many sports, but at 18 years old he was diagnosed with osteogenic sarcoma (bone cancer) in his knee and was forced to have his right leg amputated. While in hospital, Terry was so overcome by the suffering of young child cancer patients that he decided to run across the vast country to raise money for fighting the disease—and it would revolutionized cancer research in Canada

After 18 months of vigorous training, Terry’s run began with little fanfare and he spent days alone in the sleet and cold rain. Enthusiasm grew though, and money collected along his route began to mount, especially when he reached Ontario. He ran 26 miles (42 km) a day through six provinces until, on September 1st, after 143 days and more than 3300 miles (5,373 km), Terry was forced to stop and enter a hospital, because the cancer had spread to his lungs. An entire nation was stunned when Terry passed away ten months later. The monumental Canadian was gone, but his legacy was just beginning. WATCH an inspiring video and learn what happened next… (1980)

In the 40 years since, The Terry Fox Foundation continues working toward his goal of a world without cancer. Thousands of volunteers organize annual Terry Fox runs across the country every year—and to date, over $750 million has been raised for cancer research in Terry’s name. Before his death, at 22 years old, Fox became the youngest person ever to be awarded The Order of Canada.

And on this day in 1869, the North Carolina legislature passed an anti-Ku Klux Klan Law, which prohibited night riding and wearing masks, to combat the racist group’s excessive violence. Two months later, empowered by the law, Governor Holden declared martial law in two counties and deployed troops after several murders. Although the troops fire no shots, more than 100 men were arrested in the effort to restore order and protect blacks and white Republicans. Two years later, the U.S. Congress held hearings on the Klan and passed a harsh anti-Klan law modeled after this North Carolina statute.

Happy Birthday to Beverly Cleary, the beloved children’s book author who turns 104 today. It was Cleary’s own school librarian who took a special interest in her and said that someday she should write for children, the kind of books she longed to read but could not find on library shelves—funny stories about neighborhood kids growing up. And so Ramona Quimby, Henry Huggins, Ellen Tebbits, and The Mouse and the Motorcycle were born. (1916) 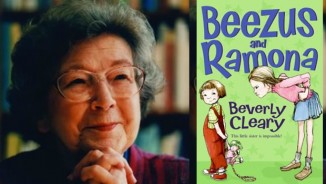 The neighborhood streets of Klickitat and Tillamook, where her characters play, actually exist in the Portland neighborhood where Cleary went to school.

She became a librarian herself, after having earned a B.A. in English at UC Berkeley. Little boys were bored in her library because there were no books about “kids like us.” Her first book, Henry Huggins was published in 1950 –her last came out in 1999– and she has sold 90 million books. She has also won numerous literary awards, written two autobiographies, and now lives in a retirement community in Carmel, California.

Today is also “Drop Everything and Read” day, a school program –D.E.A.R. – that allows kids to lie around in classrooms with books of their choosing. This week is also National Library Week. Visit her website at Beverlycleary.com. WATCH a 2016 interview with Cleary about her 100th birthday…