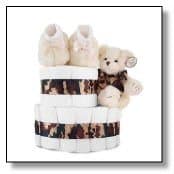 Camo is so popular and it seems everyone wants to have a camo baby shower!  So how can YOU have a unique camo-themed baby shower that’s not like the rest of ’em?

Here are some decorations and shower ideas that might help.

Games To Play at a Camo Baby Shower

There are lots of fun ways to decorate for a camo baby shower.The most important thing to remember is to have fun with it.  Baby showers are special and the theme should be exactly what you want regardless of what other people think.