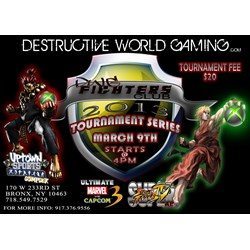 So You Think You Got Game

Destructive World Gaming has started their first local tournament series for the fighters community. This will be a monthly tournament event. So you think you got game well, here is your opportunity to prove it. DWG will recognize the top two gamers form each tournament in the series with a certificate of achievement of Exceptional play for an outstanding display of skill, technique, style, and gamership. This certificate will entitle them to compete in the semi finals. The top eight of the semi finals will compete in the DWG Fighters Club tournament series finals. The winner will be awarded and recognized by DWG as a PRO gamer.

Super Street Fighter 4 A.E.
XBOX 360 SYSTEMS
BYC-Bring your own controller/fight stick (we will have controllers available)
Double Elimination Bracket
First to 3 wins
99 second each round
Loser of a match may reselect a new team
First to 3 Matches
Winners Semi Final, Losers Semi Final and Grand Final will be First to 5 Matches

General Guidelines
DWG will present general play instructions, mandatory game play settings, and game controller directions during the tournament introduction, prior to the commencement of play. Players are responsible for understanding the game controls, following DWG’s instructions.
All contestants will be guaranteed a minimum of 2 games before being eliminated from the tournament.
This is a Double Elimination Tournament. The first match of play will determine the Division grouping for all subsequent matches. The winners of the division grouping round will be placed in Division (1) Winners and those who lose will be placed in Division (2) Losers. Matches played in all divisions will be considered “Do or Die, Winner Goes On” all losses will result in elimination. The winners from division 1 and 2 will then face each other for the grand prize.

Code of Conduct
Any player competing in a manner that is not in compliance with these Official Rules may be immediately disqualified from this Tournament. Players will conduct themselves in a reasonable manner, maintaining a friendly and polite demeanor to tournament officials and to other players. Players will refrain from the use of vulgar language. Abusive behavior, including harassment and threats is prohibited. Abuse, fighting, or any threatening action or language, directed at any player, spectator, official, or any other person is prohibited. Any action that interferes with the play of a game, including but not limited to, purposely breaking a game station, interfering with power, intentionally disconnecting the network connectivity, and abuse of in-game pausing, is prohibited.
Tournaments prize winners are 1st place and 2nd place. Prize total will be set by DWG, who has the right to change value prior to the start of the tournament based on the number of entrants.
Registration will begin online December 11, 2012. Tournament day registration will start one and half hours prior to the scheduled start of play at the Tournament. Participants who register online will get priority to register for the tournament first. Because space and time are limited, DWG cannot guarantee that all entrants will be able to participate. The maximum number of entrants able to participate in the tournament is 32. In the event of a vacant spot, any walk-up participants will be eligible to register on a first come, first served basis. Walk-up participants must provide photo identification and cash entry before being able to participate.
Eligible Tournament participants will be notified of their acceptance once the online registration form is completed via email. Each participant must attend the event with photo identification and cash payment for entry into the tournament. Participant failing to provide the I.D. and/or entry fee will forfeit their spot in the tournament. Limit one Tournament entry per person.

General Conditions
Destructive World Gaming “DWG” and its agents are not in any way responsible or liable for damages, loss, or injury resulting from participation in this Tournament by any Participant or from the acceptance, possession, shipping and handling, loss, use, or misuse of any prize awarded in this Tournament. By entering, each Participant assumes sole liability for injuries, including, without limitation, personal injuries and/or damage to property, caused or claimed to be caused by participating in this Tournament, or the acceptance, possession, shipping and handling, loss, use, or misuse of any prize awarded. DWG has the right to cancel, terminate, or modify this Tournament if it cannot be completed as planned due to conditions beyond DWG control.
The Commissioner is not responsible for any failure to contact Participants, whether due to technical or human error.
By entering this Tournament, each Participant consents to the posting and use of his or her name and/or photograph on DWG’s website and in any and all media in connection with promotion, publicity, and advertising for the DWG, this Tournament or other promotions by DWG without any further attribution, additional notification, or compensation. DWG may film, record, and/or take photographs during the Tournament, and may use the resulting footage, recordings or photographs for a range of purposes, including, without limitation, for marketing and promoting DWG and its products and services. By attending the Tournament, each Participant authorizes DWG to film, record, and/or photograph his or her voice and likeness (“Image”), and also grants DWG the irrevocable right to use any footage, recordings, or photographs of him or her recorded or taken during the Tournament, or any reproduction or modification thereof (collectively, the “Recordings”) in any manner and medium throughout the world an unlimited number of times in perpetuity for advertising, trade, promotion, exhibition, or any other lawful purpose. Participants waive moral rights, if any; Participants may have in Images and Recordings. By attending the Tournament, each Participant further waives any right of inspection or approval of the uses to which DWG may put the Recordings, and releases DWG from any and all claims arising out of or in connection with the Recordings, the Participant’s Image, or DWG use thereof.
Good Luck,
Destructive World Gaming