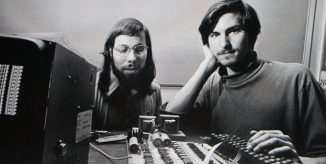 50 years ago today, President Nixon signed a law that required the Surgeon General’s warnings to be placed in view on all tobacco products. It also banned cigarette advertising on television and radio in the US beginning the following year. (1970)

And, on this day in 1976, the Apple Computer company was founded by Steve Jobs, Steve Wozniak and Ronald Wayne to sell their ground-breaking Apple I personal computer kits. Their startup is now the most valuable company in the world.

Also, on this day in 1940, Wangari Maathai, the Kenyan environmental activist and scientist who started the Green Belt Movement, was born. Focused on planting trees, she became the first African woman to receive the Nobel Peace Prize for “her contribution to sustainable development, democracy and peace”. Started in 1977 and run mostly by women, Maathai’s movement has planted over 51 million trees and trained 30,000 women in forestry, agriculture, and bee-keeping, helping them earn a living while preserving land. She was also a member of Kenya’s Parliament and the first Eastern African woman to receive a Ph.D. (1940–2011)

And, in 1973, John Lennon and Yoko Ono held a press conference to announce the formation of a new country called Nutopia. Not for April Fools day but ahead of the release of the Mind Games LP that included a written description of the “country” and its laws and a track called Nutopian International Anthem, which contained only silence. “Nutopia has no land, no boundaries, no passports, only people; Nutopia has no laws other than cosmic; all people of Nutopia are ambassadors of the country.”

Happy 72nd Birthday to the Jamaican ska and reggae musician, singer, and actor, Jimmy Cliff. After scoring his first hit at age 14, he went on to record such uplifting songs as “Wonderful World, Beautiful People”, “Many Rivers to Cross”, “You Can Get It If You Really Want”, “Reggae Night”, and covers of Cat Stevens’s “Wild World” and Johnny Nash’s “I Can See Clearly Now,” from the film Cool Runnings (the Raggae Movie). He starred in the film—and recorded the title track for—The Harder They Come, which popularized reggae music across the world. And, in 2010, Jimmy was inducted into the Rock and Roll Hall of Fame. WATCH an inspiring song… (1948)