On this day, 100 years ago the singer–songwriter and actress Peggy Lee was born in North Dakota. You might know her sultry voice from her 1958 hit single Fever, but she was also nominated for 12 Grammy Awards, including Best Contemporary Vocal Performance for her 1969 hit Is That All There Is. You may also know her as the voice of the Siamese Cats in Disneys Lady and The Tramp.

From jazz to pop, she worked with Benny Goodman, Randy Newman, and Quincy Jones in a career spanning six decades. Lee created a sophisticated persona that leant itself well to acting, but she was also a composer, writing music for films, and recording conceptual albums combining poetry and music. WATCH a video of Fever… (1920–2002)

And, on this day in 1918, the Democratic Republic of Georgia was established after the collapse of the Russian empire. 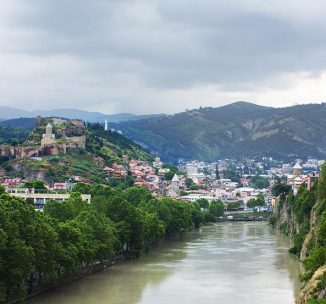 The three years of Georgian independence was a catalyst for the development of a national feeling among the people, a major factor that made the country one of the most active “independist” forces within the Soviet Union. In the post-Soviet era the first President of Georgia was democratically elected on this day in 1991, National Independence Day.

On this day in 1998, Australia held its first “National Sorry Day” with reconciliation events nationwide attended by over a million people. They gathered to honor the continent’s mistreated indigenous population, particularly the children who were taken from their homes. The government officially expressed sincere regret for the injustices suffered in past generations, and “for the hurt and trauma that many indigenous people continue to feel as a consequence of those practices.”

And, on this day, in 1907, John Wayne was born in Winterset, Iowa. Nicknamed “The Duke,” Marion Robert Morrison became an instant star after his role in John Ford’s 1939 film, Stagecoach. 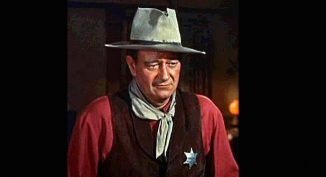 He went on to play the hero in 142 pictures, and won the Oscar for Best Actor for True Grit (1969). His voice, swagger, and charisma in action films and westerns made him a major box office draw for thirty years. Wayne’s other well-known Western roles include: a cattleman driving his herd in Red River (1948), a Civil War veteran whose young niece is abducted by a tribe of Comanches in The Searchers (1956), and a troubled rancher competing with a lawyer for a woman’s hand in marriage in The Man Who Shot Liberty Valance (1962). He is also remembered for his roles in The Quiet Man (1952), Rio Bravo (1959), and The Longest Day (1962). In his final screen performance, in The Shootist, he played an aging gunfighter battling cancer — three years before his own death in 1979 from stomach cancer at age 72.

And, on this day in 1999, the Manchester United Football Club completed an unprecedented Treble—a triple-trophy year, winning the English Premier League, the FA Cup, and the European UEFA Champions League, becoming the first and only English club to achieve the feat. After winning no titles the previous year, 1998-99 became the most successful season in the club’s 117 year history. During the campaign, ‘Man United’ lost only five times—and had a run of 33 games unbeaten.

The team’s never-say-die attitude, along with David Beckham’s bending kicks, were keys to their success—and a dramatic comeback in the Champions League final. True to their season-long tradition of thriving in difficult situations, on May 26, Teddy Sheringham and Ole Gunnar Solskjær each scored in injury time to overturn Bayern Munich’s first-half lead to win 2-1. Tens of thousands of fans lined the streets of Manchester to welcome home the team that instantly became the world’s richest football club, and the most valuable sporting brand worldwide. WATCH the 20-year tribute…