Happy 70th Birthday to comedian, actor, and writer Jay Leno, who hosted The Tonight Show for 22 years. Since retiring from his Emmy Award-winning gig in 2014, he’s been producing and hosting Jay Leno’s Garage, which features his exquisite classic car collection.

Last week, he unearthed a never-before seen segment of the show for his YouTube channel featuring a youthful Elon Musk stopping by the Garage with a black Tesla Roadster that was the very first customer model ever made—which carried a VIN number of 001. Leno and Musk discussed the unique properties of the electric Roadster during a tour and a test drive. WATCH the video of a young Musk and Leno… (1950)

Leno graduated from Emerson College with a speech therapy degree before founding his own comedy club. Until the COVID-19 pandemic, he regularly entertained over 200 audiences every year with his standup routines. He performs at USO shows for soldiers and has been known to give gorgeous cars to veterans.

And, on this day in 1926, Harper Lee, the author of To Kill a Mockingbird, was born. 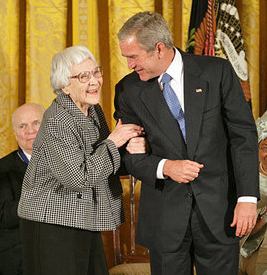 During the two and a half years spent writing the novel in New York, the Alabama-born author became so frustrated that she tossed the manuscript out the window, into the snow. Her agent made her retrieve it… Published in 1960, the book was immediately successful, winning the Pulitzer Prize. It became renowned for its warmth and humor, despite dealing with the serious issues of rape and racial inequality.

Also on this day, in 1916, Ferruccio Lamborghini, the Italian engineering genius, was born. His Lamborghini car company, set up in 1963 to compete with established marques like Ferrari, came to represent motoring glamour like no other. Born to grape farmers but impassioned by mechanics, he began manufacturing tractors, founding Lamborghini Trattori in 1948. After purchasing a Ferrari, he realized the cars had inferior clutches, were too noisy, and had interiors too spartan to be proper road cars… 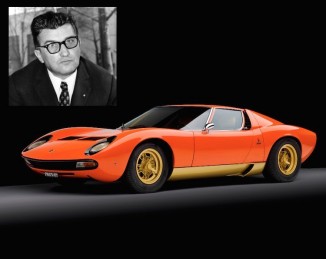 In 1963, he launched his auto company to create the perfect touring car–one that offered plush appointments and high performance, without compromising tractability, and ride quality. Automobili Lamborghini, located in Sant’Agata Bolognese, gained wide acclaim in 1966 for the Miura sports coupé (pictured above), which was a milestone in the industry, and established rear mid-engine and rear wheel drive as the standard layout for high-performance cars of the era. He sold his luxury auto company in 1974 and retired to become a wine maker in Umbria until he passed away in 1993. (Books and Lamborghini swag on Amazon)

150 years ago today, Chinese and Irish laborers working on the First U.S. Transcontinental Railroad laid ten miles of track in one day, a feat which has never been matched. Crews would labor just two more weeks until the day when the last “golden” spike was driven in by a silver hammer at Promontory Summit, Utah connecting 1,912-miles (3,077 km) of continuous railroad track constructed over seven years—opening up the Western U.S. from Omaha, Nebraska to San Francisco. (1869)

The record feat, achieved not far from Promontory, involved crews of the Central Pacific railroad which organized an army of workers and five train loads of construction material (transported via ships sailing around Cape Horn). They laid 10 miles (16 km) of track in one day—a record that still stands today. 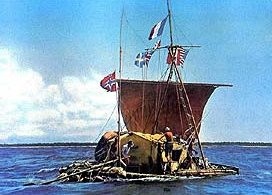 On this day in 1947, Norwegian writer and explorer Thor Heyerdahl set out from South America on the Kon-Tiki, a hand-tied raft made of balsa trees, to prove that ancient Peruvian natives could have settled Polynesia. With five Scandinavian crew mates, he successfully navigated 4,300 miles (6900 km) of the Pacific Ocean in 101 days, landing safely on a reef in the Tuamotu Islands. Heyerdahl’s book about his experience, Kon-Tiki: Across the Pacific in a Raft — became a bestseller, and the documentary film he directed chronicling the adventure won an Academy Award. WATCH the trailer…