On this day 100 years ago, the sitar maestro Ravi Shankar was born. The Indian musician and Hindustani classical composer was perhaps best known as a major influence on The Beatles’ George Harrison. Introduced to Shankar’s music by The Byrds and David Crosby, these artists helped popularize the use of Indian instruments in pop music, and Ravi’s popularity surged. In 1967, Shankar performed a well-received set at the Monterey Pop Festival and his live album from the show hit No. 43 on the Billboard chart—and led to his performance at the Woodstock festival.

Shankar won five Grammys including for Album of the Year awarded to The Concert for Bangladesh (with George Harrison), two for Best World Music Album (nominated alongside his daughter Anoushka once), and a Lifetime Achievement Award. His other daughter is singer-songwriter and 9-time Grammy winner Norah Jones. WATCH his two daughters play sitar and sing to honor their father… (1920)

Ravi composed for sitar and orchestra, and toured the world in the 1970s and 1980s. In the 90s he also served as a member of the upper chamber of the Parliament of India, then moved to California and continued to perform until the end of his life in 2012.

Listen to Traces of You, from the LP of the same name by Anoushka Shankar & Norah Jones:

More Good News on this Date in History:

On this day in 1915, the jazz singer-songwriter Billie Holiday was born. Nicknamed “Lady Day,” Holiday’s vocal style, strongly inspired by jazz instrumentalists, pioneered a new way of manipulating phrasing and tempo. In the late 1930s she recorded “Strange Fruit”, a song based on a poem about lynching. Her autobiography, “Lady Sings the Blues,” also the title of a 1956 LP, was later turned into a movie starring Diana Ross. She died at age 44.

And, on this day in 1956, the first rock & roll show to be regularly scheduled, and nationally-broadcast, premiered on CBS Radio Network. 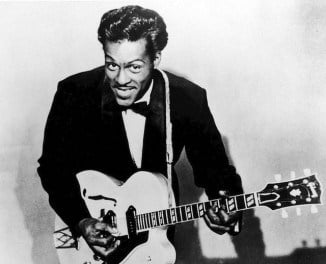 Alan Freed’s ‘Rock ‘n’ Roll Dance Party’ was hosted by the DJ who first promoted the new musical genre. Often called “the father of rock ‘n’ roll,” Freed introduced the phrase “rock and roll” in the early 1950s and said, “Rock and roll is a river of music that has absorbed many streams: rhythm and blues, jazz, rag time, cowboy songs, country songs, folk songs. All have contributed to the big beat.”

And on this day 81 years ago, Francis Ford Coppola, one of the greatest filmmakers of all time was born. His bout with polio as a youngster in Queens spurred Francis to develop his imagination and produce puppet theater plays. Though also gifted in engineering and music, he chose drama and film majors in college and soon won 6 Academy Awards, for The Godfather (Best Picture and Screenplay), for The Godfather Part II (Best Picture, Director, and Screenplay), and for his screenplay on the film Patton.

Coppola announced last year that he would begin production on his epic magnum opus, Megalopolis. “Utilizing all I have learned during my long career, beginning at age 16 doing theater… it will be a production on a grand scale with a large cast. It is not within the mainstream of what is produced now.”

Coppola wrote Megalopolis in the early ‘80s and later shot some second unit footage for the film before the terrorist attacks of 9/11 halted the project because the script contained scenes that would be disturbing in the aftermath. The story is about a remarkable architect who wants to redesign New York City into a modern utopia (but has to fight against a nemesis, the city’s conservative mayor)—and Coppola has his eye on Jude Law, as well as many other big names to star in the expansive film.

Since his last film in 2011 (Twixt), Coppola has been busy as the owner of multiple resorts, cafes, a literary magazine, a line of pasta called Mammarella Foods, and three wineries, The Coppola Winery in Geyserville, California, a family destination containing a restaurant, swimming pools, and a museum of his movie memorabilia, including Vito Corleone’s desk. Most recently he put his family name on new organic strains of marijuana. (1939)

Also an author of books, Coppola has the distinction of being one of only 8 filmmakers to have won the Cannes Film Festival’s Palme d’Or twice—for The Conversation, which Coppola directed, produced, and wrote, and his next film, Apocalypse Now (1979), a vivid depiction of insanity in the Vietnam War.

And, celebrate International Cloud Lovers Day. It’s a day to look up at the sky, wherever you are on planet Earth, and spend a few moments appreciating the beauty and splendor of clouds.

An event planner from Boston, Danny Bloom, co-created the celebration while living in Taiwan. A new blog features great cloud photos, a cloud-spotter app, and much more from the Cloud Appreciation Society. (2007)