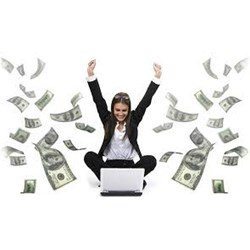 For years and years I tried to make money online.  I think I must have tried just about every way possible.  I tried home business opportunities with physical products, home business opportunities with digital products, and even affiliate marketing.
All with no success.
I was trained to sign up a downline to make residual income, but struggled doing this, yet over and over again, I signed up for this program or that program, until I realized one thing…
each thing I tried and every method I used to market gave me tid bits of information, but because I couldn’t organize that information in a logical way, all that I was doing was adding to my confusion…. and frustration.
There were tons of times that I felt like throwing in the towel and giving up all together.
Yet I trudged on.  And on.  And on.
Regardless of the fact that I continued to struggle and go further and further in debt, I had a feeling that one day I would find a way to become successful.  A way that wouldn’t require me to surf for credits for hours at a time.  A way that wouldn’t take 20 hours a day of my time.  A way that would somehow put all these tid bits that I had learned over the years into some sort of logical order.  A way that would make sense to me.

Or profitably either.  All it was causing is a bunch of aggravation, frustration, and overwhelm.
I tried to market using all free methods like on safelists, traffic exchanges, and on free classifieds.  Now don’t get me wrong, those methods can work, but you need to invest hours of your time and all the while you are posting and surfing for credits.
While trying to earn free credits to advertise your stuff, you are bombarded with shiny offers about other ways to make money.  Ways that look like they are sure to work.
So ultimately what ended up happening?
I found myself jumping from program to program.  Business opp to business opp.
Soon I found myself signed up for tons of safelists, tons of traffic exchanges, and tons of free classified lists.
Not long after this, I discovered that I could potentially make money advertising the safelist, traffic exchanges, and classified ad sites themselves.  So what do I do?
Well I sign up as an affiliate for them and try to advertise them along with my business opportunity, which multiplied my work and my confusion to the point where I felt myself chasing my tail basically.
I mentioned that I was overwhelmed.  Well that is an understatement.  I don’t think there is a word for just how frustrated I was becoming.
It would have been easy to quit and just give up on the idea of making any money online, BUT there was something inside me that kept screaming to me that I could do it.  I could organize all of this info that I had learned during all those years, and put it together into some sort of logical order.
I just had to find the way.
A way that made sense to me.
So I kept searching and searching, and before long…. something amazing happened.

An email appeared in my personal email box which was advertising a training program that offered a free trial.  It was made by a woman well known in the online world.
Right away it caught my attention because I knew I had heard this name before.  I remembered seeing her picture somewhere online but I couldn’t place her face.  I just knew that I had heard of her being successful, and I wanted to learn from someone who was successful.  So I took a look.
Like I said, the training offered a free trial, and the videos that she did and included in the free trial showed me how much of a normal person she was.  She wasn’t claiming to be a millionaire or that she had a downline of thousands of people or anything far fetched.
What she was offering made sense to me.
What she claimed was not far fetched, and I could totally see that it was doable for me as well.
I wanted to learn what she does.  I wanted to put all of the other nonsense I’ve done before and the chasing my tail aside, and just do what she would teach me to do in her training.
I wanted to put the good tidbits of info that I had learned in all those years to use, follow her training, and just get it done….
once and for all….
I was ready to start doing what it takes to make money online.

What Works For Me

This training program that I found to be so useful in finally helping me to make money online is called “One Week Marketing” and it is made by none other than “PotPie Girl”
I could tell as soon as I watched the videos within the free trial that this woman was going to teach me alot.  She was going to pull all of those tidbits that I have learned over the years all together.
I have never met PotPie Girl in person, nor had I ever spoken to her or worked with her in the past.  For some reason however, I immediately trusted her and knew that the information she was going to share with me inside the training would make sense to me.  She would be teaching me how to do exactly what she does. Exactly what she has done to become successful at making money online.
None of the ways she described involved surfing traffic exchanges, or reading safelist emails, or posting on classified ad sites.
She would be teaching me how to make money online through Squidoo.
Prior to watching the free trial videos made by PotPie Girl, I had heard of Squidoo, but had never taken a good look at it.  All I knew however is that what she was planning to teach me in the training was going to work for me as long as I took the information and put it into action.
In the videos I quickly noticed that the information would be presented so that no matter how much experience you had with trying to make money online, you would be able to follow it.  Anyone could do it.
I could see that this would work for me, so as soon as the free trial was over, I had no hesitation in signing up for the paid version.  That was several months ago and I have been nothing but pleased with the results I have been having.
I’m not going to put photo’s on here showing you some bogus paychecks that I have received.  I’m sure you have seen enough of them if you have spent any time at all trying to make money.  All I’m going to say is that if you are still looking for a great way to make money online for free, you will not regret taking a look at this training program.
***When I took my first look at this training, she was offering a free trial.  That was several months ago, and I’m not sure when you are actually reading this info, so I am not sure if the free trial is still being offered or not.  If it is no longer being offered, I want to assure you that even if you need to pay for the entire training up front, it is well worth its price many times over!
The video link below will lead you to a video which will give you all of the information you need to decide if this training is right for you.