A repayment of gratitude 170 years in the making has rekindled an affectionate bond linking the Great Irish Potato Famine of almost two centuries ago with a Native American tribe in Oklahoma suffering today from the coronavirus pandemic.

In 1847, when Ireland was experiencing years of starvation due to a potato blight, the North American Choctaw tribe joined a compassionate campaign in the U.S. to help these strangers an ocean away.

Despite their own suffering, having been forced to relocate hundreds of miles from their native land, the tribe pooled their pennies and raised $170 (almost $5,000 in today’s currency) to send to the Emerald Isle through a relief fund.

Today, the Navajo and Hopi tribes have been hit hard by the COVID-19 pandemic. Their high rate of infection is thought to be due to a lack of running water in one-third of all homes and shortage of groceries, forcing families to leave the reservation for supplies.

To finance a plan to provide bottled water and other supplies directly to the reservation, a GoFundMe campaign was set up by Navajo and Hopi families. Now, almost $2.7 million has been raised so far, with many donations flowing in from Irish citizens expressing gratitude for the help they received so many decades ago.

RELATED: Irish Prime Minister Re-Registers as Medical Practitioner So He Can Join the COVID-19 Response Team

“Ours is a debt that can never be repaid, but please consider this a small token of love and solidarity from your Irish brothers and sisters. Praying for the strength, wellbeing and prosperity of your community always” said Caroline Kelly, adding a Gaelic message of unity. “Ar scáth a chéile a mhaireann na daoine.”

“When the Choctaw people had nothing, they gave Ireland all they could at a time when we needed it most. I know it’s not much, but I hope this helps our friends in their time of need,” added Ciaran Mc brearty.

MORE: At Long Last, Native California Tribe Has Land To Call Their Own

“Sending Irish blessings, hope, faith and love to our dear Native American brothers and sisters whose ancestors gave us hope in our time of need so many years ago, too,” wrote Aoife Galway. “Thank you agus sláinte, Aoife ☘❤”

Three years ago, a soaring silver monument to honor the donations from Native Americans was unveiled in County Cork, Ireland—and Choctaw leaders were invited to the grand unveiling. 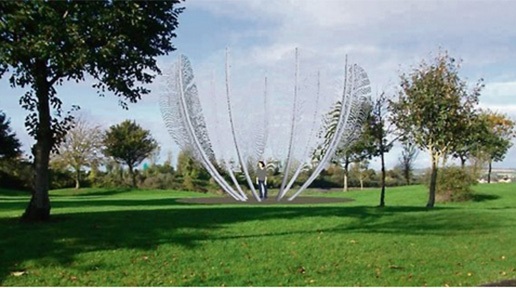 Asked about his inspiration to create the huge stainless steel sculpture of nine eagle feathers, the local artist Anex Penetek said, “I wanted to show the courage, fragility and humanity that they displayed.”

The financial support continues to pour in, hour by hour, along with messages of solidarity linking two cultures who uniquely know the meaning of widespread suffering—and the value of supporting one another through it.

SHARE the Sweet Story of Brotherhood on Social Media…