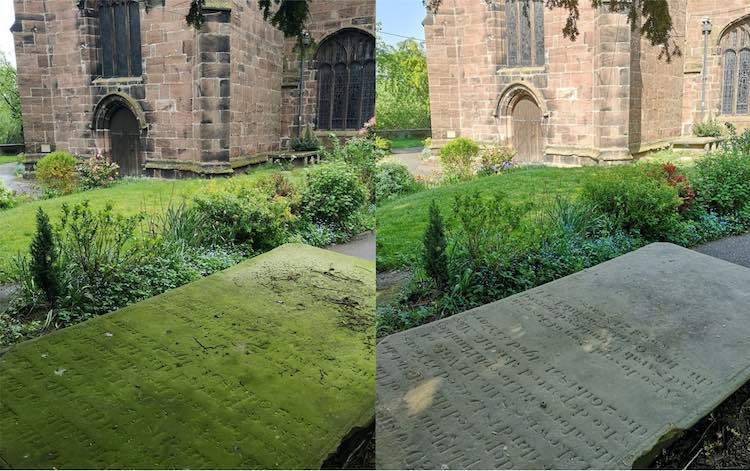 An English father and his three kids have been using their daily outings during the COVID-19 shutdowns to clean neglected headstones in local cemeteries.

Every day since the lockdowns were first implemented one month ago, 37-year-old Ryan van Emmenis has been taking walks around his neighborhood in Winsford, Cheshire.

Emmenis was first inspired to launch his labor of love after a friend published a picture of their family member’s headstone to Facebook. Since the grave was noticeably weather-worn and dirty, Emmenis—who runs his own cleaning company—offered to clean up the stone for free.

With his cleaning supplies in hand, Emmenis stopped by the headstone on his daily walk through town and tidied up the grave maker—and he was floored by how much better it looked.

Emmenis then resolved to take 20 minutes out of his daily walks to clean up some of the grave markers around town. With the help of his kids, he has tidied up two dozen headstones in the St. Chad’s and Swanlow Park cemeteries.

Emmenis says that while he has been using industrial cleaning products for some of the older headstones, his kids have been working with soap and water.

“You’ve got to be respectful of the fact that it’s someone’s family member, it’s someone’s memories. You’ve got to make sure you’re using the right products and you’re being careful and delicate with it,” Emmenis told the Press Association News Agency. “Some of these headstones I’m cleaning are over 100 years old—and algae, moss etc. can have a really negative impact on them so you’ve got to be really careful.”

Since Emmenis published a few pictures of his work to social media, he has been flooded with praise from neighbors, strangers, and the family members of the deceased people’s headstones.

“I had some feedback from people saying they were really grateful for what I’d done because it was family members and they hadn’t visited the grave for 20 years, they’d been unable too,” Emmenis told PA. “Someone used the term ‘you’re bringing memories back to people’.

“When a grave is dull and it’s got algae on it and you can’t read it, there’s nobody seems to give it much time if they don’t know the person,” he added. “Once you’ve cleaned up one of these graves, it’s really noticeable, which means people are stopping and taking a moment to read and remember these people.”

Emmenis recently partnered with a church vicar in order to decide which gravestones ought to be cleaned. For social media users who have been inspired by his initiative, Emmenis recommends that anyone without professional cleaning experience stick to using soap and water.