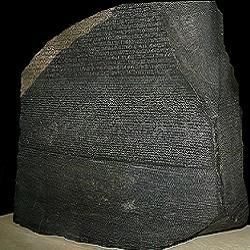 This is not about the movie you have seen starring Bill Murray. This is about the history and development of the our language, its origins and the ways the languages had dispersed throughout the centuries B.C and A.D. Have you tried to communicate with someone who did not know your language? Difficult, isn’t it? You use gestures, speak slowly, write what you want to say, give up and walk away defeated.

Nowadays, there are hand-held translators which you can always consult if you are lost in translation. What if this translator run out of juice? You can’t use it. There is still this hand-held pocket dictionary, English => Spanish, French, German or whatever or v.v. What if you don’t have that also? Then, you run to the nearest bookstore and get one. You can always pull a stranger and ask for their help. Sir or Madame, Do you speak English? You do that until you find someone who knows your language and help you.

I heard that in France, people love their language very much that a foreigner can hardly find someone who speaks English or other languages. If this is not true, it must only be a rumor. There is nothing wrong about protecting your own language. Celine Dion is Canadian and she sings lots of French songs. The French government awarded her with highest honors for propagating the French language.

Please mark this date, 21st of February in your calendar as International Mother Language Day.

My mother language is Filipino. I speak English, German and understand a little bit of Spanish, Japanese, French and Italian. If you are multi-lingual, have you also experienced thinking in different languages all at the same time? What happened then? My experience is, I will speak in Esperanto-like manner, simply getting lost in translation.

Photo of the Rosetta Stone-courtesy of Wikimedia Commons. Rosetta Stone is an ancient Egyptian granodiorite stone similar to granite. It contained a decree issued by King Ptolemy V in Memphis sometime in 196 BC. Rosetta Stone helped the Egyptologists to decipher the Egyptian Hyroglyphs.

Construction of the Tower of Babel which was painted around 1370’s; German Late Medieval Period

Noah and his family with chosen animals survived the Great Floods and after God made a covenant with Noah not to punish mankind again with floods, all people were united and spoke one language, one speech presumably Adamic language which was spoken by Adam and Eve in the Garden of Eden. It could also be Sumerian. Sumer was a city in the Southern part of Mesopotamia which is known to be the modern-day Iraq.

People came from the east and settled in the land of Shinar. A Tyrant named Nimrod ruled the people and ordered them to build the tower which was reaching up to the heavens to reach God. He is the grandson of Ham, who was the son of Noah. Nimrod persuaded the people to believe that they were building it for their happiness not offering it to God. Once again, God showed His mighty wrath punishing the people by making them speak in different languages. As a result, the tower could not be finished because the people did not understand each other so they scattered all over the world. One can refer also to King James version of the Bible, Genesis Chapter 11, Verses 1-9 about this.

People dispersed to establish their families and tribes to build several different nations. There were at least 70+ dialects spoken.

Images of the Tower of Babel. Babel means Confusion in Hebrew language.

The Tower of Babel as painted by Pieter Bruegel the Elder, a Flemish painter, sometime in 1563.

It is believed that the foundation was not round but square.

The Hanging Gardens of Babylon was one of the 7 wonders of the world. This was engraved and hand-colored by Martin Heemskerck, a Dutch artist, around 16th century depicting the Tower of Babel at the background.

Neo-Babylonian king named Nebuchadnezzar II built the gardens for his wife, Amytis of Media, to pacify her because she was homesick and longed to see some familiar plants from her homeland. The gardens were destroyed by sevetral earthquakes. Photo courtesy of Wikimedia Commons

The Confusion of Tongues was engraved by Gustave DorÃ©, a French artist ,sometime in 1865. God punished them for being vain.

This engraving depicts how people scattered as they did not know what their neighbor was saying. This was the early case of Lost in Translation.

My first name is GLORIA. See my name in Russian, Georgian and Greek language. I did my very best.

I wrote my name using the Russian, Georgian and Greek translator.

Greece is one of the cradles of civilization. Thank you for sharing us the Alphabet. Alphabet = Alpha + Beta

If you are members of the College Fraternity or Sorority, you understand these Greek letters.

To be continued… Available Soon…PART 2