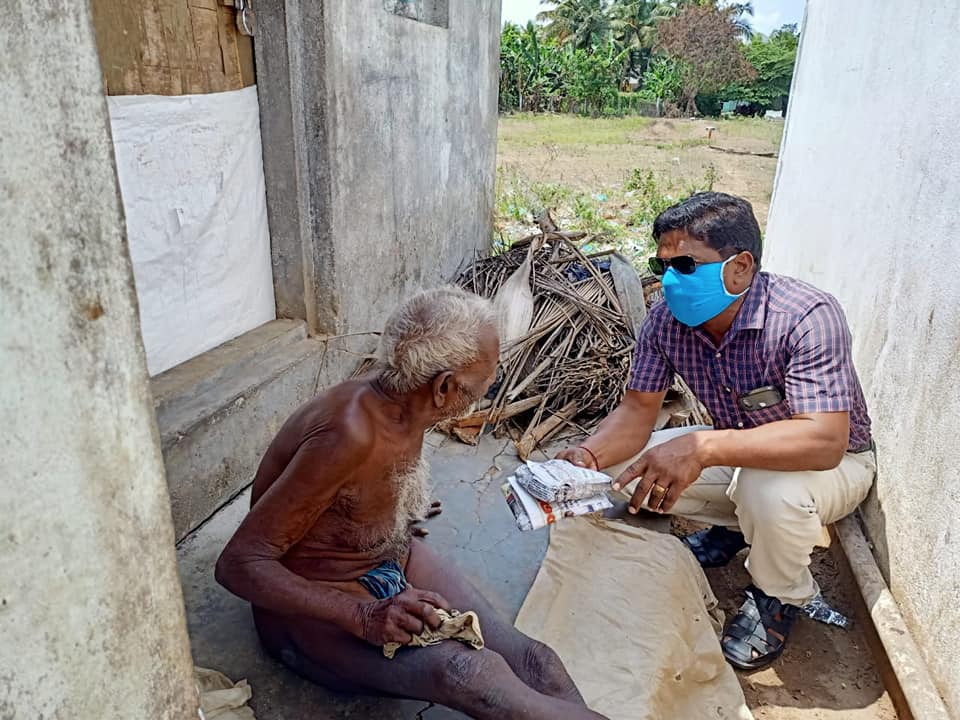 A union territory in India with lovely beaches and serene streets is one of the most attractive weekend destinations for busy folks in Southern India. While normally offering a mélange of culture and heritage, Puducherry’s currently-deserted beaches are sufficient to indicate the magnitude of the COVID-19 crisis here.

But, one man has taken to heart the idea that ‘a crisis provides the opportunity for us to do things we could not do before.’

“This phrase has proved absolutely true for me,” said Sasi Kanta Dash, PhD, who has recently completed 40 days of food distribution to the elderly.

Principal of Tagore Government Arts and Science College in Pondicherry, he has been serving hot meals to those confined in their homes during the local lockdowns which started in March.

“It had been my dream to give back to society and the nation. My soul guided me to take the first step. I took the initiative of channelizing the positive energy of the local people and started with feeding 250 people on day one,” Dash told GNN.

“We didn’t know the extent of the lockdown when it was announced for the first time on March 24th,” Dr. Dash continued. “But the immense satisfaction at the end of the first day catalyzed the actions for the future.”

Starting with a WhatsApp group of senior citizens who were unable to visit a pharmacy for medicine due to closures in public transit, Dash began to deliver prescriptions to those self-quarantining.

For about 15 days after that he took to bringing families packets of essential cooking supplies like rice, sugar, salt, oil, assorted vegetables and dal (a dish of lentils and beans).

RELATED: School’s Food Drive to Help Those Affected By Looting in Minneapolis Turns Into Tsunami of Grocery Bags Deliveries

Gradually the word spread and a few local organizations came forward to support the efforts. A helpline number was set up to receive the calls requesting help.

Along with elderly and daily-wage earners who are unable to eat if they don’t work, Dr. Dash’s charitable mind turned also to the “section of our population dependent on the alms offered by places of worship and other commercial and public places,” after which his operation expanded to those villagers within a 10 kilometer radius of the beach town.

The kitchen in his campus of Tagore Government Arts and Science College is one of the kitchens being used to cook food for people, and his team currently provides groceries for 600-700 families, as well as catering for 250 people of 14-15 different villages.

POPULAR: Rival Gangs in Cape Town Agreed to An Unprecedented Truce—and Together Bring Food to the Poor

“Today, June 3rd, we have entered the 40th day of food distribution and more than 10,000 meals have been served. The food is prepared under the supervision of volunteers to ensure quality, hygiene and nutrition content, and we have a group of 20 volunteers who have come forward to extend their support.”

An advocate of a clean and green economy and environment, Dr. Dash also works as an organizer and member of numerous planting and cleaning drives in Puducherry.

For readers familiar with Indian cuisine, Dash’s delivery and catering are certainly fortunate in that they get to enjoy dishes like mushroom pulav, egg biryani, karakkuzhambu, groundnut rice, veg pulav & biryani, laddu, and bananas.