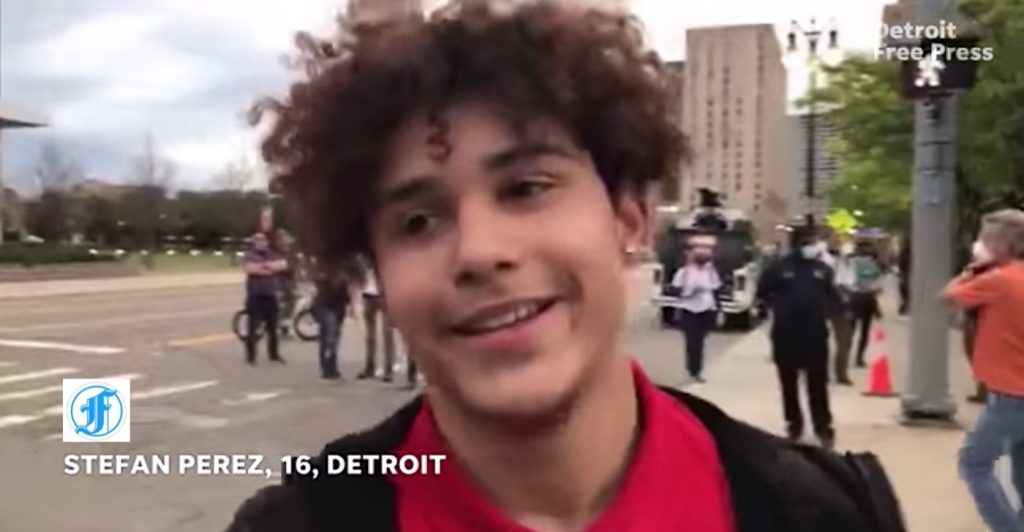 16-year-old Stefan Perez began marching into downtown Detroit with 15 people. More and more joined him until he became an unwitting leader of a large crowd. Above all else, the Michigan teen vowed to keep everyone in line, and get them back home safely.

At the end of the march, after no looting or fights, he urged the protesters to comply with the city’s 8 p.m. curfew so that no one would get hurt.

With a megaphone thrust into his hand, he kept the protesters calm, even though he said “they were scared,” and some of them tried to defy his peaceful intentions.

While the reporter was interviewing the young activist, Mayor Mike Duggan called on someone’s phone and the call was broadcast via speakerphone on Facebook Live.

“Son, I was watching the video and I saw your leadership. I have tears in my eyes, said the mayor. “You are everything that’s special about the city of Detroit… We’re going to fight this injustice because of people like you.

POPULAR: Hero Teen is Rewarded for Returning $135,000 He Found Next to ATM

Stefan replied, “Some police officers walked with us in uniform who stand united with us today, and I’m glad that you do, too.”

The mayor, who asked the teen to meet with him this week, isn’t the only one who’s proud of Stefan.

If it weren’t for his grandmother, he said, he wouldn’t be where he is today. “As a teenager, I have put her through a lot of stuff, but she stuck by my side when I needed it the most—and she’d be proud of what we accomplished tonight.”

MORE: New Jersey Teens Take Matters into Their Own Hands to Help First Responders and Small Businesses Amidst COVID-19 Crisis

“The fact that I was able to put my hand up and stop everybody from causing trouble here tonight, I look back and smile at that moment,” said the sophomore from the Communication and Media Arts High School. “The people followed me into battle and I’m glad that I was able to get them home safely.”

The previous evening, the first night of the curfew, things had became tense in the Motor City as police fired tear gas and rubber bullets when protesters refused to disburse.

Stefan, whose ancestors are African-American, Mexican, Puerto Rican and Nicaraguan, was more interested in taking a knee in peaceful solidarity when the crowd reached Michigan Avenue on Monday.

WATCH the LIVE interview (and hear the mayor’s call at around 5:00)…