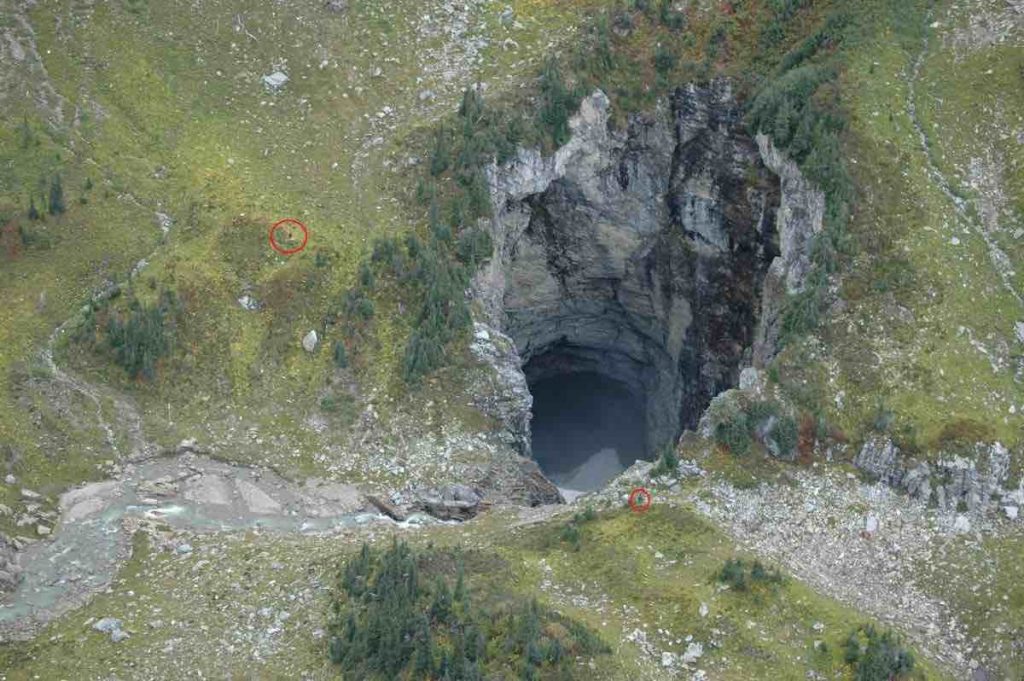 Just south of Alaska in British Columbia, Canada, amid the rugged countryside of Wells Gray Provincial Park, the entrance to a cave was discovered in 2018 that was so vast it could comfortably fit the entire Statue of Liberty in the antechamber.

Reporting on the discovery at the time, GNN covered an interview with John Pollack, an archeological surveyor and governor of the Royal Canadian Geographical Society. He explained to Canadian Geographic the enormity of his expedition’s find.

“The opening is 100 meters long by 60 meters wide, and when you’re standing on the edge looking down into it, your line of sight is nearly 600 feet [183 meters],” added Pollack. “You don’t get lines of sight of 600 feet in Canadian caves — it just doesn’t happen. And this is a shaft. It goes down quite precipitously, it had a large amount of water flowing into it and is wide open for as far down (as) we’ve gone.”

“The scale of this thing is just huge.” he added.

Despite its entrance ranging 330 feet wide and 200 feet deep, it went undetected for so long, geologists believe, because a plug of ice had formed underneath a significant pile of snow. The steadily warming climate since the 1940’s, as confirmed by geological survey and satellite imagery, eventually caused the ice to collapse, revealing the scope of the massive feature.

MORE: Himalayan Mountaintops Visible for the First Time in 30 Years as Air Pollution Continues to Plummet in India

The Sarlacc Pit – Two Years on

Since its discovery in 2018, scientists have had very little opportunities to study the cave—which they nicknamed the Sarlacc Pit after the iconic monster in Star Wars: Return of the Jedi—due to the small window of time it can be safely explored. The snows must be gone and the water level of the river running down into it has to be sufficiently low—phenomena that only occur during September and some of October.

The shaft at the opening consists of layers of recumbent folds of marble and garnet mica schist, with minor quartzite. In places, the marble has distributed quartz grains that stand out in relief against the calcite and sandy limestone. The scientists used a helicopter, camera, and later, software, to produce a spatially correct 3D model of the visible portions of the entrance.

“The Disappearing River,” near the Hare Indian River Plateau in NWT, is one of the finest examples of a sinking river in Canada, but this Wells Gray cave’s flow is significantly larger, with a uniquely dramatic, vertical shaft of huge proportions.

For now, to ensure the cave can be examined in a pristine condition, authorities have placed fines in excess of $1,000,000 for trespassing to deter rock climbers, plunderers, and Instagram travel influencers.

“We think it may connect to a much more ancient cave system,” Catherine Hickson, one of the scientists who discovered the cave, told CBC.

Unfortunately according to Hickson, the warming of the climate is almost certainly responsible for the cave’s unveiling, an umbral stain on the otherwise sunny news of the discovery.

“This collapse is likely related to climate change as evidenced by the gradual recession of glaciers in the immediate area,” read the paper, published in February, 2020, in the Canadian Journal of Earth Sciences.

But Hickson and other geologists admit the melt has “opened up a tantalizing opportunity” to explore what might be the largest cave entrance of its kind in Canada.

The paper concluded that the cave has an unknown depth and lateral extent, but based on the suspected resurgence feature it is expected to be at least 500 yards deep (460m) and 1.34 miles in long (2.16 km).

Official naming of the cave has been postponed, even now 2 years after its discovery, until First Nations cultures can be consulted.

“What we don’t know is the state of those open passages, how far they go,” she said. “We know that in other caves around the world, there’s life that has been adapted to that extreme environment,” says Hickson.