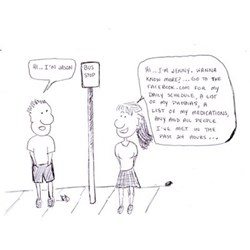 I remember signing up for Myspace. After tinkering with it for a month or so, I realized that this wasn’t the place for me. It seemed like only teenagers were on it. Then, along comes Facebook. I joined up, and unlike Myspace, everyone seemed to be on it, young and old. I forget exactly when it was that I was introduced, but since it’s inception, Facebook has really taken off on a path of it’s own. My favorite was the chatroom. You could literally log in, check out who was in the chat room, click on their name, and have a conversation that was pretty much like being on the phone. I found a lot of old friends and classmates that way. But since that novelty has worn off, I’m really not online as much any more. I will sign in, check to see if I have any messages, then get off. But, I guess I’m the minority. Most folks I know have gone ga-ga over Facebook. They have it on their phones ( which I do not ), and they get minute-to-minute updates. I’ve actually seen fellow employees trying to do their jobs, and participate on Facebook, all at the same time. It’s mindboggling to me. And some are really good at it. What they don’t realize is if they were to fully concentrate on their jobs, they’d be exemplary employees, not just adequate ones, cause believe me, things on the job will get by you by not concentrating fully. And the ones who puzzle me the most are the ones who have to put ALL of their business online. What? They are what I call Facebookaholics. They need counseling. It’s that bad. I’d be willing to bet that at least half of the ones who are driving and texting are on Facebook. Pure madness. It’s a soap opera in disguise. I get on my friends all the time about putting business on the site that they shouldn’t. Cursing is a definite no-no, but even worse is letting everybody know that you are going to be or are not home, and out of town many times. That’s nobody’s business. Talk about the trip you took AFTER you get back. Criminal elements are everywhere, and everyone is not your friend. And for the younger folks, you shouldn’t be on this site at all. You, as well as a lot of grownups, are just too immature for some of the shenanigans that goes on on a daily basis. Parental Guidance is definitely suggested for you. That’s just my thoughts, though. What’s yours?