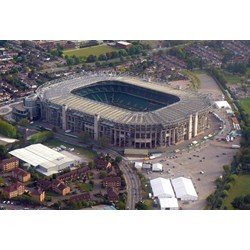 Twickenham is the largest stadium in the
world that is entirely devoted to rugby union, and is considered one of the
most iconic arenas in sports. The stadium hosts the biggest events in rugby
union, including the Premiership final and European cup matches. It also hosts
many England international games, particularly during the Six Nations
competition. As part of England’s bid to host the Rugby World Cup in 2015,
Twickenham was selected as one of the main arenas for the tournament, and will
host two quarter final games, both semi finals and the final.

The stadium was built in 1909 when several
sell-out international games gave the RFU the idea of building a venue solely
dedicated to rugby union. At the end of 1909 England played their first
international game at the new stadium against Wales, which also sold out. For
many years crowds were left wanting when it came to a good England performance.
For years the international team failed to win a game at their home stadium,
and at one point went two years without scoring a try at Twickenham. The fans
continued to flock to the venue however, and soon the capacity of the ground
was expanded.

The stadium has seen many redevelopments
over the years. Most recently in 2005 a new South Stand was built which raised
the capacity to 82,000. Along with it, brand new hotel and hospitality
facilities were made available to fans. Twickenham rugby hospitality packages
are internationally recognised as some of the best in international rugby. The
stadium caters for small and intimate events to bigger occasions, when
celebrity guests and players often hold question and answer sessions. As part
of the expansion a health and leisure club was also built, along with a new
rugby shop and an arts complex. The new hotel that was built contained six VIP
suites which gave the fans a very unique opportunity to watch the entire game
unfold with a perfect view of the field.

Inside the stadium sits the World Ruby
Union Museum. Inside are many artifacts from the entire history of the game,
spanning the entire globe. The museum hosts a variety of special events and
exhibitions throughout the year. The museum holds items such as an England
player’s rugby shirt from the very first international game, and the Rugby
Union World Cup trophy that was won by England in Australia in 2003.

Twickenham has also more recently been used
as a venue for rugby league games, including matches in the Rugby League World
Cup and the Challenge Cup Final. Many games that had been scheduled at the new
Wembley Stadium were moved to Twickenham after construction on Wembley had been
delayed. Twickenham has also played host to various live concerts, including
performances from Rolling Stones, Bon Jovi, and R.E.M. It’s also hosted stops
on reunion tours for Genesis, The Police, and Iron Maiden.

Even though Twickenham is better known for
being the main beacon for rugby union in England, over the years it has become
a regular venue for bigger rugby league games and concerts by some  of the world’s biggest musical acts. With the
wide variety of hospitality packages available and new expansions made to the
stadium, it has become more modern without losing touch of its past. The Rugby
Union Museum is held up as the stadium’s pride and joy. With the same
sentiment, Twickenham is held with great pride and joy by the entire English
sporting community.