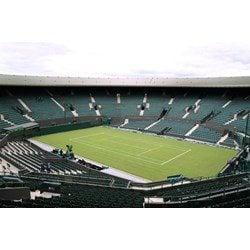 History Of The Wimbledon Championships

The Wimbledon Championships started off with the founding of the private club ‘The All England Lawn Tennis and Croquet Club’ in 1868. The club held the first annual Lawn Tennis Championship, along with its own code of laws and rules. These ruled have survived to this day, with only two exceptions regarding the height of the net and the distance between the net and the service line.

The first official event held was the Gentlemen’s Singles. 22 men played in the tournament with Spencer Gore (a professional cricketer!) beating William Marshall to victory. Unfortunately Spencer lost out the next year to Frank Hadow.

In 1884 the Ladies’ Singles and Gentlemen’s Doubles were added to the tournament, with the Ladies’ Doubles and Mixed Doubles being added in 1913. The next big change to Wimbledon occurred in 1922 – after this year, reigning champions had to play the entire tournament to defend their title. Before this, they only had to play the final match to keep their status as champion.
The Wimbledon Tennis Championship was first televised in 1937.

Since 1994 Wimbledon’s owners and organisers have completed a series of renovations to keep Wimbledon the world’s premier tennis tournament. These renovations and improvements have included:
*A new court in Aorangi Park
*A broadcast centre
*Two extra grass courts
*A tunnel linking Church Road and Somerset Road
*Creation of the Millennium Building
*Extension of Centre Court’s West Stand by 728 seats
*Creation of a museum, a bank and a ticket office
As well as all of these new additions, a retractable roof was created in 2009 over Centre Court. This allows play to continue through all weather.

There are many traditions that Wimbledon has made famous. One of its most familiar sights are the ‘BBGs’ ball boys and girls. Crucial to the smooth running of the championships, each BBG usually serves one tournament – however there have been a number that serve two tournaments. Traditionally, BBGs were selected from local Children’s Homes. In modern times, they are selected from local schools. BBGs usually serve when they are 15 years old, or in years nine and ten of school. Since 1985, BBGs are equal numbers of girls and boys. It is seen as a high privilege and each child gets paid £120-£160 for the 13-days they are required to work.

As Wimbledon is considered a huge event in the UK, there is frequently a royal presence
at games. It is required of players to bow/curtsy if Her Majesty the Queen or HRH Prince of Wales are in attendance.

Another well-known Wimbledon tradition are the uniforms required to be worn by players and staff. Players are required to wear predominately white clothing. No commercial branding is allowed. Up until 2005, BBGs, linesmen and the chair umpire had green uniforms. Post-2005 Ralph Lauren has designed new uniforms to replace the green. The new uniforms consist of a navy blue and cream theme.

Of course, there is the well-loved tradition of indulging in strawberries and cream during the Wimbledon season!

Prize money was first awarded in 1968. 2007 saw male and female winners finally receiving the same prize money.This has been quite a controversial move however, as female competitors spend half the amount of time on the court as their male counterparts. This is due to women only being required to play three sets, resulting in a higher rate of pay per hour for the women in the competition.

As with most championships, there are two main trophies up for grabs. The first trophy is awarded to the Gentlemen’s Singles champion, in the form of a silver cup. The Ladies’ Singles champion receives a sterling silver salver, sometimes referred to as the ‘Venus Rosewater Dish’. All other winners receive a silver cup. Runners up all receive engraved silver plates.

If you would like the chance to see these amazing atheletes in action for the 2013 Championships, try a Wimbledon Hospitality Package