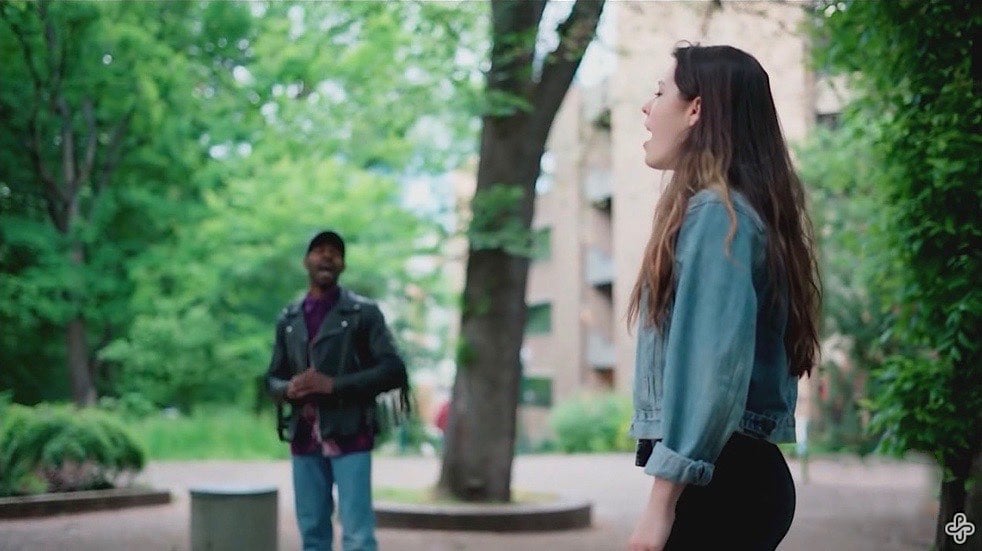 A commencement recording of the national anthem became so much better than a social-distancing performance when a man wandering by decided to join in with magnificent harmonies.

Portland State University graduate Madisen Hallberg was being recorded in a public city park that runs through the campus, after the school’s decision to hold a virtual ceremony on June 14.

Suddenly, while the video crew was recording her rendition of The Star Spangled Banner, the Oregon opera singer Emmanuel Henreid happened to walk by.

The classically trained singer who performs with the Portland Opera wanted to join in. It was completely serendipitous and, as you can see by the video, totally beautiful.

“Once he started singing I immediately relaxed into the sound of his voice,” Hallberg told GNN. “His voice was so good, and I realized I was getting the chance to sing with a super talented musician!”

Henreid, who goes by Onry, has been singing at Black Lives Matter protests trying to keep his instrument in shape as all local musical venues have been closed—and his dates with the opera company cancelled.

Hallberg was thrilled that his quest for singing in the streets landed him in her video.

“I saw it as a total blessing—and getting the chance to do that felt truly special during this time of the virus where we as musicians are often isolated.”

“I was totally surprised that someone would have the courage to just walk up and ask, but that’s something that I admire about him.”

MORE: Opera Singers Have Been Hosting Weekly Concerts in Their Driveway to Bring Neighborhood Together

“Looking back, I’m so glad that people are touched by what happened,” she added. “I think it’s important to spread positivity and hope for the future, and I think that’s what two people coming together to sing the anthem can do.”

WATCH Onry wander in the video about half way through…

PROUDLY Hail This Performance By Sharing The Beauty on Social Media…