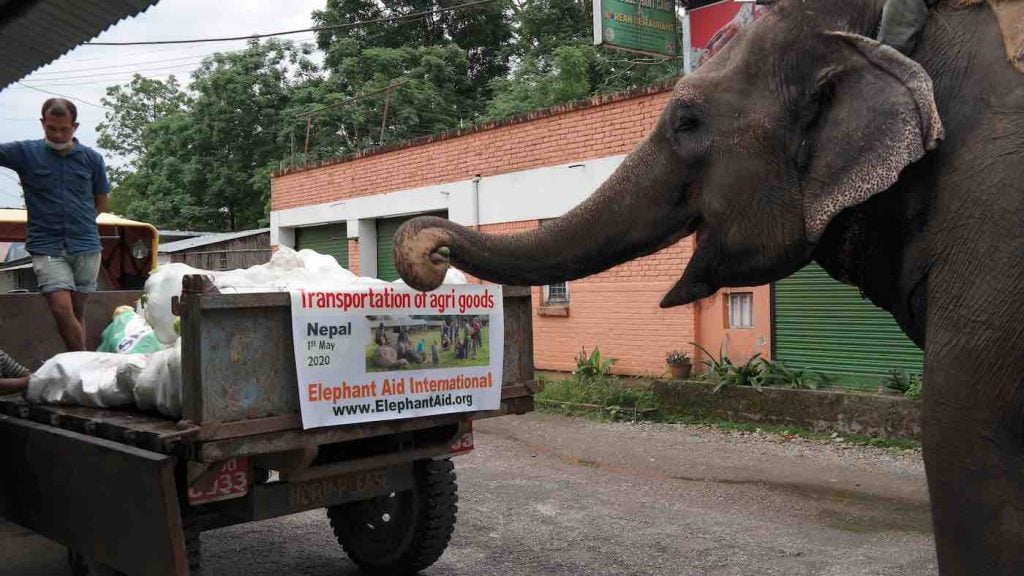 In Asia, elephants working in the tourist trade have been idled by the COVID-19 worldwide shutdowns. It’s not cheap to feed elephants, especially when they’re not bringing in income for their owners to feed properly.

Thankfully, Carol Buckley and her organization Elephant Aid International (EAI) have created a win-win-win solution for tourist trade elephants and farmers in Nepal.

Over the course of the last decade, EAI has been striving to improve the treatment of elephants in captivity by working directly with elephant owners, government officials, charities, tourist facilities, and elephant welfare groups. The organization is also in the midst of launching a new elephant sanctuary in North America so pachyderms being released from captivity can finally have a place to retire.

More recently, the group has been working in the Nepali province of Sauraha, which is known as the gateway to Chitwan National Park—the nation’s first national park famous for its majestic wildlife, including tigers, rhinos, and elephants. Since thousands of tourists visit the park each year, the region maintains a healthy tourist trade.

RELATED: India Gets Its First Ever Hospital for Abused Elephants – and They’ve Already Treated Dozens

Now that there are no tourists amidst the novel coronavirus outbreaks, however, elephant owners were quoted in the Kathmandu Post saying that they have been having difficulty finding food for their elephants, which could have disastrous short- and long-term consequences for the pachyderms.

Ordinarily, privately-owned elephants are prohibited from entering the park—but after Buckley alerted the Nepali government to the predicament, the ban was lifted so the elephants could graze during the day.

The elephants are still prohibited from being in the park at night—and since elephants normally spend about 20 hours a day eating, their owners were left with the challenge of finding enough food for them to eat at night.

LOOK: People Are Installing Portable Hand-Washing Sinks for the Homeless in Cities Across the US

Buckley then assembled a team of Nepalis and together they came up with a simple, but elegant solution.

Because of the COVID-19 lockdown, local farmers have had no one to harvest the produce growing in their fields. Rather than being forced to let the food rot, Buckley and her team found farmers who were willing to sell their produce, arranged for workers to harvest the food, and then delivered it to the delighted elephants and their owners.

Now that the elephants are fed and the local farmers are generating income, Buckley plans on continuing the initiative for as long as necessary.

WATCH: Orphaned Elephant Returns to Human Rescuers So She Can Introduce Them to Her Newborn Calf

“I have provided assistance to the elephants of Sauraha for 10 years. Seeing them enjoy the delicious produce is heartwarming,” Buckley told Good News Network in an email.

“Working together with the farmers, locals, and mahouts has improved the lives of these hard working elephants,” she added. “It is a joy to know that our efforts are pleasing to the elephants and their mahouts.”