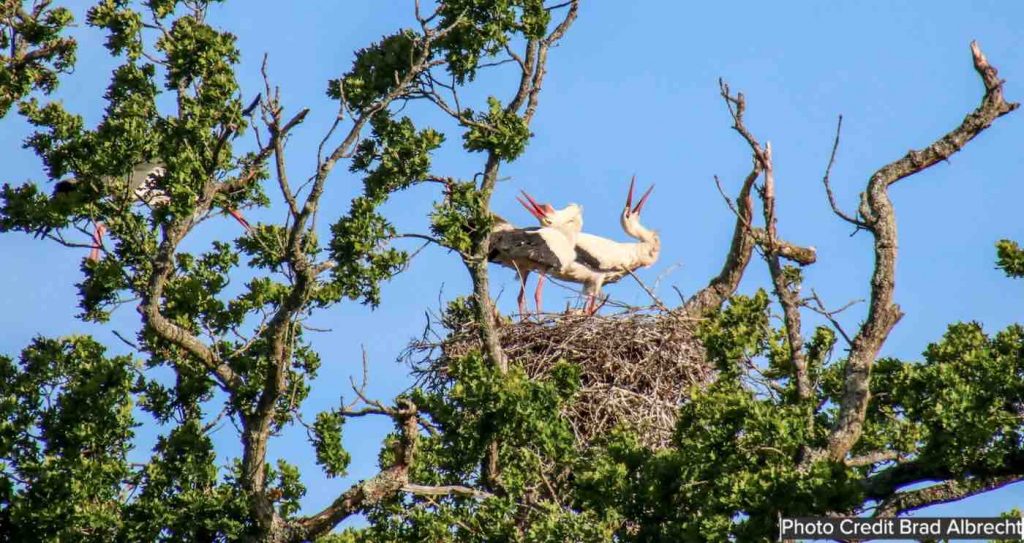 The babies brought by these storks weren’t delivered in blankets.

The White Stork Project was delighted to announce last week that wild storks in West Sussex have hatched their very own babies—and it is believed to be the first time in England since the 1400s.

On a private estate used for stork conservation called the Knepp site, five eggs appeared in a nest high up in an oak tree. After 33 days of incubation, and much tending by the pair of storks, the first chick hatched on May 6.

White Stork Project Officer Lucy Groves watched as eggshell was removed from the nest and the parents were seen regurgitating food for the new chicks to eat.

This is the same pair that attempted to breed at Knepp last year without success. The female is a ringed bird from the project, which came to Knepp in 2016 from Poland. The male, however, has no identifying ring, so this is likely to be one of the twenty or so vagrant storks which visit the UK each year.

RELATED: Humpback Whale Population Bounces Back From Near-Extinction—From Just 450, to Over 25,000

“The parents have been working hard and are doing a fantastic job, especially after their failed attempt last year,” said Groves excitedly. “It is incredible to have the first white stork chicks hatch in the wild for hundreds of years here at Knepp.”

There are two other breeding pairs on the property with six eggs having hatched in two of the nests.

“These are early days for the chicks, and we will be monitoring them closely, but we have great hopes for them.”

A total of three private estates have constructed 6-acre predator-proof pens where storks have been introduced.

166 rehabilitated wild-fledged white storks from Poland, as well as a small number of others from northern France, have been released into these pens over the course of the last three years, in order to establish local breeding populations, based on the successful approach used to restore white stork populations in Europe over the last 50 years.

The co-owner of the Knepp estate, Isabella Tree, said that when she hears the clattering sound coming from the tops of their oak trees “it feels like a sound from the Middle Ages has come back to life.”

“We watch them walking through the long grass on their long legs, kicking up insects and deftly catching them in their long beaks as they go – there’s no other bird that does that in the UK.”

Lucy says, especially now, the birth brings hope: “This stunning species has really captured people’s imagination during the period of lockdown and it’s been great hearing about the joy and hope they have brought to people.”

It is an exciting first step toward reestablishing 20 wild pairs of these majestic birds at each of the three locations—bringing them back into the south of England once again.

WATCH a new video from the project…