Today is the 50th anniversary of Earth Day: On this day in 1970—when water and air pollution were out of control—20 million Americans in colleges, schools and communities observed the first Earth Day.

The movement’s leader, Sen. Gaylord Nelson, directly credited this outpouring of public support for persuading U.S. politicians that environmental issues had a voting constituency. Within two years, the country saw passage of the Clean Air Act, the Clean Water Act, establishment of the EPA, the ban on DDT, and the reduction of lead from paint. Today the holiday is celebrated annually around the globe. 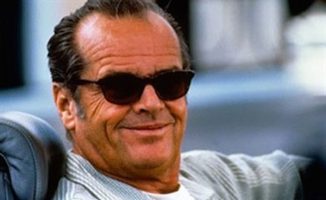 Happy Birthday to Jack Nicholson who turns 83 years old today. Born in New Jersey, the actor has excelled in genres from satirical comedy to romance to dark portrayals of antiheroes and psychopaths. Working in Hollywood for more than 60 years, he has played the “eternal outsider, the sardonic drifter,” the rebels against social structure – and his 12 Academy Award nominations make him the most nominated male actor in the Academy’s history. Only he and Michael Kaine have been Oscar-nominated in every decade since the 60s.

Among his many memorable performances, including the colonel in A Few Good Men, Nicholson won the Oscar twice, for the 1975 drama One Flew Over the Cuckoo’s Nest and in 1997 for the romantic comedy As Good as It Gets. He also was named Best Supporting Actor in 1983 for Terms of Endearment. (1937)

On this day in 1969, British yachtsman Robin Knox-Johnston became the first sailor to circumnavigate the globe non-stop and single-handed. He launched his solo voyage from the British Isles at age 29, in a 32-ft (9.8m) ketch. Despite losing his self-steering gear off Australia, he rounded Cape Horn and several months later arrived back in Falmouth, completing the trip in 312 days. He authored several books and completed his second solo circumnavigation in 2007 at age 68—and is still sailing (he won a trophy at age 75) from his home base in London. WATCH a video about the voyage…

The spark for the idea was a British newspaper announcing a trophy and prize money to the first person who could do it. Nine men set off in the first Golden Globe race—but only this former Navy man completed it, and he was knighted for the accomplishment. Such round-the-world races became a popular adventure sport. “The challenge is just as stiff as it was in my time; the only difference is they know it can be done.” (Visit his website to learn more.)