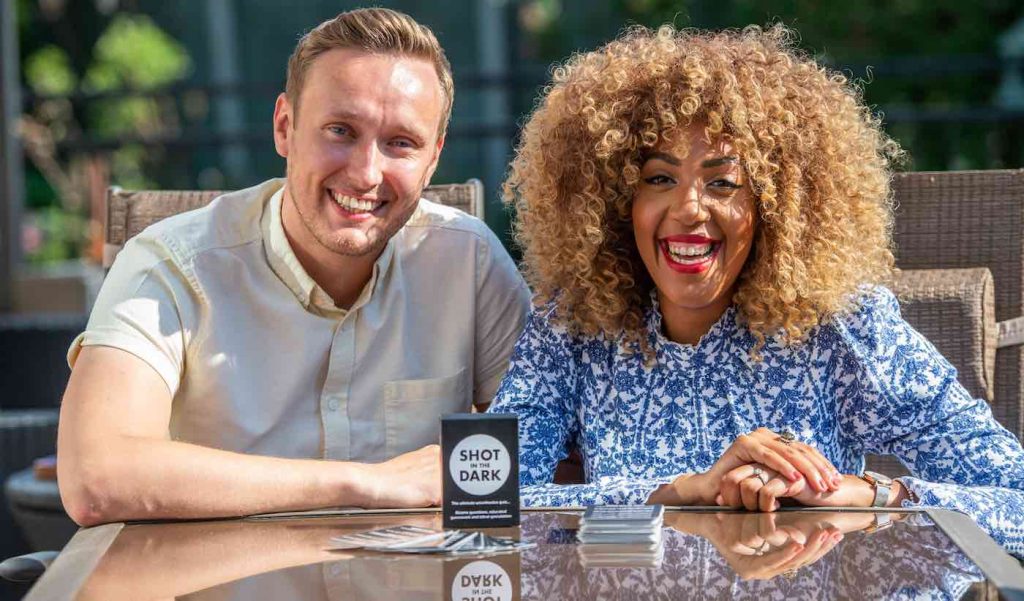 The British couple who created a brand new quiz card game is celebrating their success after sales have 9rocketed during lockdown, earning them over $180,000 (£150K).

Grant and Jordanna Sanderson were shocked to notice their tally of units sold had jumped 1,000% as soon as Covid-19 restrictions were announced in mid-March—maybe because the game is actually enjoyable for family members of any age.

The pair came up with the concept at Christmas in 2016, after a tense family game of Trivial Pursuit.

Unlike the famous trivia game, Shot In The Dark involves asking completely random questions—to which nobody would really know the answer—so all players can have a fair shot at guessing, and so the brainiest at the table won’t always win.

For instance, questions in the quiz include, ‘How many liters of paint did it take to paint the Whitehouse?’ and ‘On average, at which age does a child reach half their adult height?’

Grant and Jordanna, from Leeds, England, had been selling around five card games a day since the product’s launch at the beginning of 2019, but this figure has now jumped to a massive 200 a day—that’s 13,000 packs since lockdown began.

It is being played on family Zoom sessions all over the UK.

Grant, a 30-year-old accountant, attributes the success to Amazon browsing. “We’d already been selling the game on Amazon and got some great reviews so when people started looking for quiz games it just went mental.”

“No way in a million years would we have ever anticipated this would be a side effect.”

“It is strange that our success has come on the back of such an unusual situation, but we are also pleased that we are able to provide a bit of relief from what is going on.”

Unfortunately, the game, which currently sells for £11.99 on Amazon in the UK, does not ship to the United States.

After Grant came up with the idea four years ago, he spent the next couple of years formulating questions by keeping a look-out for facts and noting them whenever he saw something interesting.

“I was just plodding along doing this when I realized I actually had enough questions to make this happen.”

Jordanna, 29, who works at a call center, came up with the perfect name, and together they created a prototype by printing out questions on bits of paper.

They got a few copies printed up and gave them to friends, who loved laughing over the useless information, such as, ‘How much vodka does the average Russian drink?’

“I’m so pleased we have created such a good product that brings people together and can make people laugh,” Grant told SWNS.

“This game is a great leveler—you can be beaten by your seven-year-old sister or 90-year-old gran.”