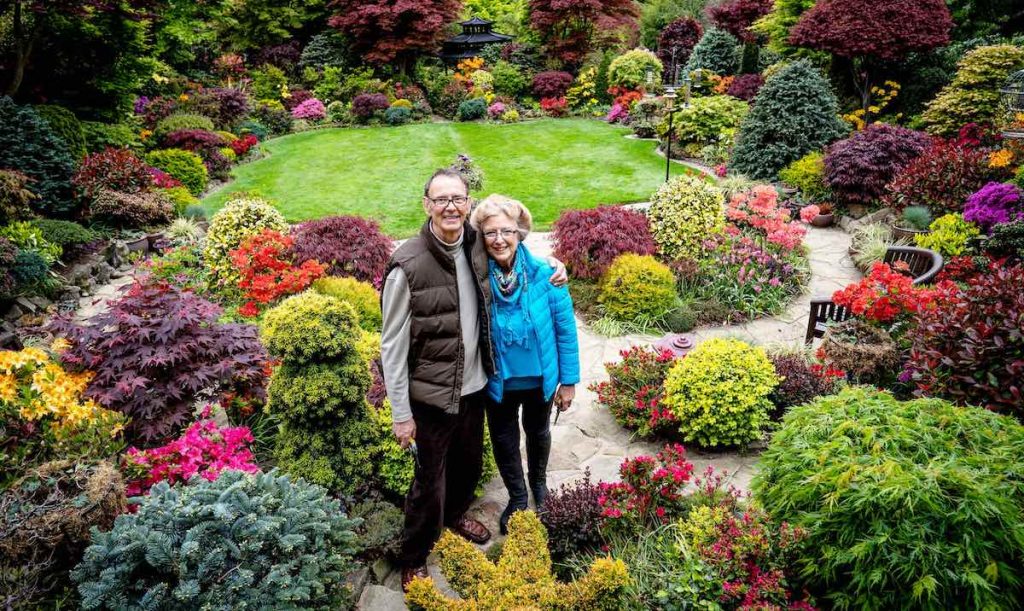 A couple who created ‘Britain’s best garden’ have outdone themselves with a spring spectacular bursting with color after spending lockdown tending to their oasis.

Retired medical doctor Tony Newton and his wife Marie have nestled 3,000 plants and flowers, including 450 azaleas, 120 Japanese maples and 15 blue star junipers into a one-quarter-acre plot of land.

The couple have spent 38 years transforming their modest yard in the industrial heartland of the Black Country into what is now nicknamed the “four seasons garden”.

Since they began self-isolating, the couple has continued to plant Acers and camellias thanks to online shopping.

Dazzling drone pictures show the garden in Walsall, West Midlands, exploding with pinks, reds, greens, and purples which the couple say is the most stunning display they have ever known.

Grandmother-of-four Marie, 72, started tending the garden in 1982 while working as a transport planner and a nurse while Tony, 70, joined her after he retired from medicine.

She said, “Tony and I usually spend two hours a day in the garden but obviously since the lockdown and the fact we are over 70 means we have even more time to spare.”

“We are sometimes in the garden all day and only come in when it gets dark.”

They had an open house planned for May 22 and they knew early on that wasn’t going to happen.

“One addition was that we put up three bird feeding stations, which we haven’t normally had and that’s given an immense amount of pleasure,” she added. “We’ve got so many different types of birds coming out.”

“We get everything we need for the garden online—a lot of plants, vegetable seeds and bird food.

“We’ve not been able to go out and we really miss the grandchildren because they used to love playing here,” she lamented, though they keep in contact through Skype or FaceTime. “We’ve got fairy houses and the streams they played in. We used to look after them on a few nights a week but that’s all stopped.”

“I always look forward to spring and this year has been especially rewarding. I have never seen the garden look so beautiful. I’m very proud, and it gives me an enormous sense of optimism.

They have also playfully created what appears to be a huge image of an owl using the patio and flowerbeds which is only visible from above.

RELATED: Check Out These Breathtaking Photos of Poppy Field’s First Bloom in Years

“Seeing the pictures of the garden from above is very special. You get a real sense of what we have achieved.

“There is always something new to try or a flower to tend to. It’s a hobby which has turned into an obsession—I think about the garden all the time.”

The couple have won several awards, including being crowned the winner of Britain’s Best Garden.

Marie added: “We haven’t been able to do a complete audit of every flower and tree but there are over 3,000 plants in the garden.”

“It has been very satisfying to use so many skills, and to have done every task ourselves. All but two of all the plants in our garden have been planted by us.”

Pictures from the 1980s show just how much work the couple have done to transform their muddy lawn and broken rockery into the oasis it is today. A lot of the plants are now 30 years old or more.

The garden has become so popular it even features in unofficial tourist trails of the Black Country.

Tony says, “We’ve had over 14,000 people from 48 different countries come and visit our garden over the years but this year we might not be able to open which is a shame.”

MORE: Over 1 Million Gardeners Have United to Create Global Network of Greenery That Nourishes Bees and Butterflies

“There has been a lot of trial and error to get the garden way it is now—and the last few weeks we’ve really been able to explore even more ideas.”

“We’re already planning what to grow for the next season.”