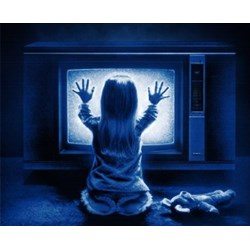 There is a mentally conditioning appliance in your home. You
use it daily. It programmes your thoughts and actions, it influences you and
entrains your family: it influences you, how to behave, how to think, what to believe and what to
buy: its your television.

So detox your mind, detox your brain, wake up from trance and hypnotic
states, from the mental conditioning, of envie, of feeling the need to buy, to spend, to keep up with the neighbours. The adverts work. They work on you. If adverts did not influence you they would have stopped decades ago; think about that.

You are being programmed, how to think, what to buy, how to behave. The big screen in your home or on your mobile device, deceives, entertains, occupies your mind, never allowing any silence in your mind, it influences your thoughts and puts repetitive jingles into your head.

When you watch that silvery screen you enter a  trance, a trance state. The news, the politicians, the influencers all; can slip in their messages and you believe what they say , you believe what you see.

The TV appliance, has prominence in your your home. Many are impressive bigger than your neighbours. You watch it passively absorbing it all daily.

Why is the media – the TV stations owned by just a few individuals and corporations – think about that.

The concepts in the book 1984 by George Orwell is in every home; he was just a few decades out on his predictive fascist state controlled by big TV screens.


We have got to get it together: NOW and STOP WATCHING TELEVISION AND TAKE BACK OUR OWN MINDS.

Television the Drug of the Nation

Through Your Eyes And Into Your Brain

Mental Zombies the God is TV.
I have no mind it thinks for me.
My TV it speaks to me.
My TV comforts me.
It shows me what I think I want.
It stops me having nothing to do.
What would I be if it wasn’t entertaining me.

We imitate the life-styles presented to us on the TV. When one show proves popular look how other, similar shows pop up: like the Real Housewives of everywhere – Atlanta, Miami, New York, Los Angeles, Beverly Hills, New Jersey, London: on and on ad nauseum.

Are these rich stupid women, role models for for us, do we want to emulate them, really?

This is popular – it tells us something about those who watch this drivel, we will watch anything! Because we are asleep drugged by television…

Don’t Take My word For It

Check these things out for yourself.

A great song about the addictive, brainwashing and eletcro-smog radiation from your television is: TELEVISION, THE DRUG OF THE NATION its a great Hip-Hop styled rap by Michael Frantis as The Disposable Heroes of HIPHOPRISY.

You can hear it on YouTube the address is:

A book that tells you how the TV is sedating you and all of us into a heterogeneous group of Group-Think Zombies is:

HOW WE BECAME THE AMERICAN ZOMBIES by Max Meeks

It discusses in an amusing but important Rant about how we are being manipulated by the TV. The Media, the politicians and false news: brainwashing us with propaganda and de-sensitising us with televised violence.

Hundreds of channels 24 Hours a day pumping out adverts, telling us what to think what to buy, its remote control of the masses.

WAKE UP, GO OUT, TAKE A WALK, TALK TO PEOPLE, DO SOMETHING ELSE.