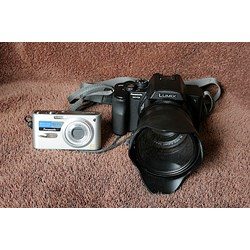 FOR THOSE WHO HATE MENU’S

If you enjoy photography like I do,
but hate navigating through your
camera’s menu’s like I do.  Read
on. I’ve been there and done that.
One of my cameras (A top brand –
good little camera.) has a maze
of menu’s that makes me get lost
in the quagmire.  I have often
wondered how I got to the menu
that I ended up in – and even worse,
how to get out of it.  Some times  I
have even shut it off and started all
over.   Have you ever been there?
Part of the problem is I own at least one each of the following cameras
[At the present time,]  all with menu’s.  And trying to remember them all
is a problem for me.  Yes, yes, I know.  I should stick with just one good
camera and learn to use it.  But I like them all.
Casio,
canon,
Nikon,
Kodak,
Panasonic,
Sony,
and have had also Olympus, Minolta and Polaroid.
All of these are fine cameras.  This is not to pick on any of them.  In fact,
I do not remember such a thing a a camera I did not like.  But
after bumping into the Panasonic Lumix, I have bought a total of five
of the things.  Does that tell you something? They have some of the
simplest menus I have seen in a camera.  And they sport a “Leica”
lens.  That’s hard to beat.
Yes, since then I have bought another Nikon and another Canon.  So I am
not saying Panasonic ends it all.
But I have found the Panasonic Lumix to be a fine camera for most people.
It comes with the Leica lens.  One of the best in the world.  The ones I have
bought seem to be well build and work very well.
BUT, the thing that caught my attention and might be of interest to you is,
THEY ARE THE MOST USER FRIENDLY CAMERAS I HAVE EVER USED.
So when you get ready to add another camera to your current array of cameras,
you might consider this old man’s opinion.   That is, if you hate menu’s too.