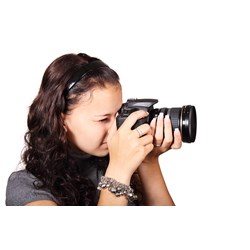 There is not that many people who don’t love to record their travels and their experiences on ‘film’. Unless you are completely indifferent to photography, chances are you have the technology to make images in one way or another. This can, of course, include camera phones and camcorders.
But, why do we love our digital cameras so much?

No one can deny that photography is one of the best ways to capture and record those very special moments that we all have. Photographs and videos are great for showing off to friends and family; they enable you to always remember trips and events throughout your life-time.
Although, I’m sure sometimes, we have all groaned at the mention of ‘why don’t you take a look at my holiday snaps?’ from your friends or family. However, annoyance aside images cannot be compared to anything else for storing memories.
Take a look at What to Consider when Buying a Digital Camera if you are convinced by this article!

What About Film Cameras?

But, wasn’t there once something called ‘film’? For some reason, film has fallen out of favour with many of us budding photographers. Why is this?
Film could be expensive as it had to be sent away to be processed and developed. We also had to buy the film itself. Who can remember those long and sometimes embarrassing waits for the negatives to return? Then, there was the issue of privacy. Whoever processed our photographs could see every single thing that we photographed. What if they were private images?
But, film did and still does, have up-sides. Nothing on this earth could replace or match the quality that film can produce. The images almost had a life of their own they were so good. Processing and developing for those who were experienced enough, wasn’t a problem so privacy and a long waiting time no longer came into it.
But, we still love Digital!

Digital Cameras Have Taken Over from Film

Most cameras you see on sale are digital. These cameras do not require film or processing in order to obtain an end result. All you require, apart from the camera itself, is a memory card. Then, you just point the camera at the subject and press the shutter button. Done!
The memory card is handy because it can be used over and over again unlike film. Memory cards are now used in many electronic devices including mobile phones, game consoles, camcorders and Ipads. A great saving of money.
Digital cameras have gained in popularity so fast that it’s easy to work out why we love them so much. They are quick and easy to use, relatively cheap to buy, give instant results and they do produce great images.  We can even print our own images by downloading them to our computers and sending them to our printer.
What is there not to love?
Images thanks to Pixabay