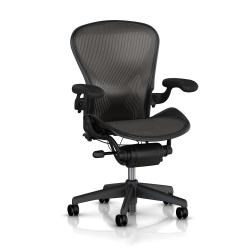 What Are The Best Ergonomic Office Chairs?

Before I even get into what I think are the best office chairs, let me tell you why I even care.

My job is a desk job, and I spend most of my day looking at a computer screen. This has caused two problems. First my eyes aren’t as good as they once were. The fix for that was relatively easy… I got glasses.

The second problem was that by the end of the day, my back really started to hurt. I knew that problem wouldn’t be as easy to solve. Turns out I was wrong.

A friend suggested the problem might be caused by the chair I was sitting in, and he recommended an ergonomic chair by Herman Miller. I’ve got to tell you I was really skeptical. Not only that, but those chairs are fairly expensive.

Sure it felt comfortable to sit in, but so does a recliner, and I doubt sitting in a recliner all day at work would help my back. I had similar doubts about a Herman Miller ergonomic chair.

Being the genius that I am, I decided I would get my self a cheaper ergonomic chair. And just as I expected, it was comfortable, but did nothing to help my back. At this point I was in full “I told you so” mode.

A short while later my friend was going to go on vacation for a week. He said I should just try his Aeron chair while he was gone. I halfheartedly agreed.

To make a long story short, I did not want to return his chair when he got back. I reluctantly did, then not so reluctantly ran out and purchased my own. So for me, any ergonomic office chair reviews start and end with Herman Miller. And now we’ll talk about why.

In A Hurry? Check Out These Herman Miller Ergonomic Chair Models At Amazon

Which Is The Best Herman Miller Ergonomic Chair For You? 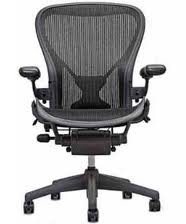 The dangers of office-related injuries is a topic that more and more workers are coming to terms with as they deal with back pains, circulation issues and strains in their necks and shoulders. Rather than relying on painkillers, or simply putting up with it, the solution to all these problems could lie in a well-designed, supportive chair. Sitting for hours on end in an ergonomic chair can have a significant, positive impact on your health but it is important to take the time to find the best chair for the job.

Herman Miller are famed for their ergonomic office supplies and this especially true with their range of chairs. The line began with the famous Aeron and has expanded to include four other interesting and specialized chairs that aim to aid posture and health in the optimal way. Joining Aeron are the Mirra, Sefu, the striking SAYL – which would stand out in anyone’s office – and the incredibly healthy Embody. Beyond these different models, buyers can customize their chosen chair even further with different tilts, arm rests and additional supports to turn it into the most beneficial and comfortable model possible for your specific needs

The highly popular Aeron chair vs. the lesser known Mirra

The most well-known of these chairs is clearly the Aeron; a quick Google search of Herman Miller ergonomic chairs automatically directs you to pages on this particular model, seemingly assuming this is the one that searchers are after, and it frequently appears in the Amazon results pages for the most popular chairs in this category. It is not hard to see why people would be so quick to praise the Aeron, especially when it boasts comfortable, PostureFit technology and a special woven seat that eliminates the need for cushions and enhances the aesthetic appeal; however, do these features really make it that much better than the Mirra, the chair that is arguably its closest rival?

Mirra also has PostureFit and other factors such as the geometric backrest and specialized flex zones and, while the use of the materials and design varies, both chairs essentially have the same purpose – to support the body, aid blood flow and provide pain relief with the most high-tech useful materials possible. The 1994 Aeron may be in the museum of Modern Art but its younger sibling is hot on its heel in terms of purpose, style and function.

Summary: finding the chair that is best for you

Essentially, the point that is being made here is that there is not one single, best chair in this range because they each have their own benefits when it comes to ergonomics and support; the best Herman Miller ergonomic chair is the one that feels right when you sit in it. If the style and feel of the Aeron is appealing then by all means purchase one but do not do so because it has great reviews or because someone else directed you there. The best thing to do is try these chairs personally because picking the right ergonomic chair is incredibly important for your health and well-being. You will be sitting in the chair for a long time so be sure to pick the chair that is right for you; just because the Sefu gets less attention doesn’t mean it is wrong.
Here’s a closer look at the popular Aeron model.