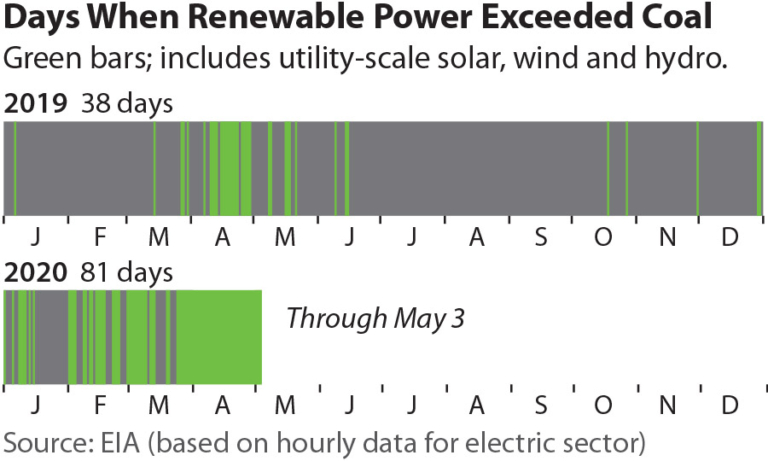 In a first for any month, renewables from solar, wind, and hydropower generated more electricity than coal on every day in April 2020, according to new data from the U.S. Energy Information Administration (EIA).

This impressive stretch actually began on March 25, when utility-scale solar, wind and hydro collectively produced more than coal-fired generation, and has continued for at least 40 straight days through May 3, the EIA’s Hourly Electric Grid Monitor shows.

These figures are even more remarkable when compared to renewables in 2019, when they only beat coal on 38 days all year.

Last April had a total of 19 days when this happened—the most of any month in 2019—with the longest continuous stretch lasting just nine days.

POPULAR: Not Only Does New Solar Chimney Cut Energy Costs By 50%, It Can Also Save Lives During a Fire

The transition away from coal for electricity generation has accelerated in 2020 due to a number of factors, particularly low gas prices, warmer weather, a significant amount of new renewable capacity connecting to the grid late last year, and more recently, lower power demand from the economic slowdown because of the coronavirus.

The Institute for Energy Economics and Financial Analysis (IEEFA) had forecasted that power generation from renewables would likely surpass coal-fired generation only next year, in 2021—and there is an increasing chance that another milestone could occur this year.

Coal’s high cost has made it increasingly one of the last fuel choices for many utilities, a trend reflected by its declining market share for electric generation: just 15.3% in April, according to preliminary EIA figures.

EIA figures also show its share continued to erode, falling to 18.3% in February and 17.3% in March. As recently as 2008, coal’s market share was above 50 percent in the months of January, February and March.

SHARE This Sunny News With Friends on Social Media…