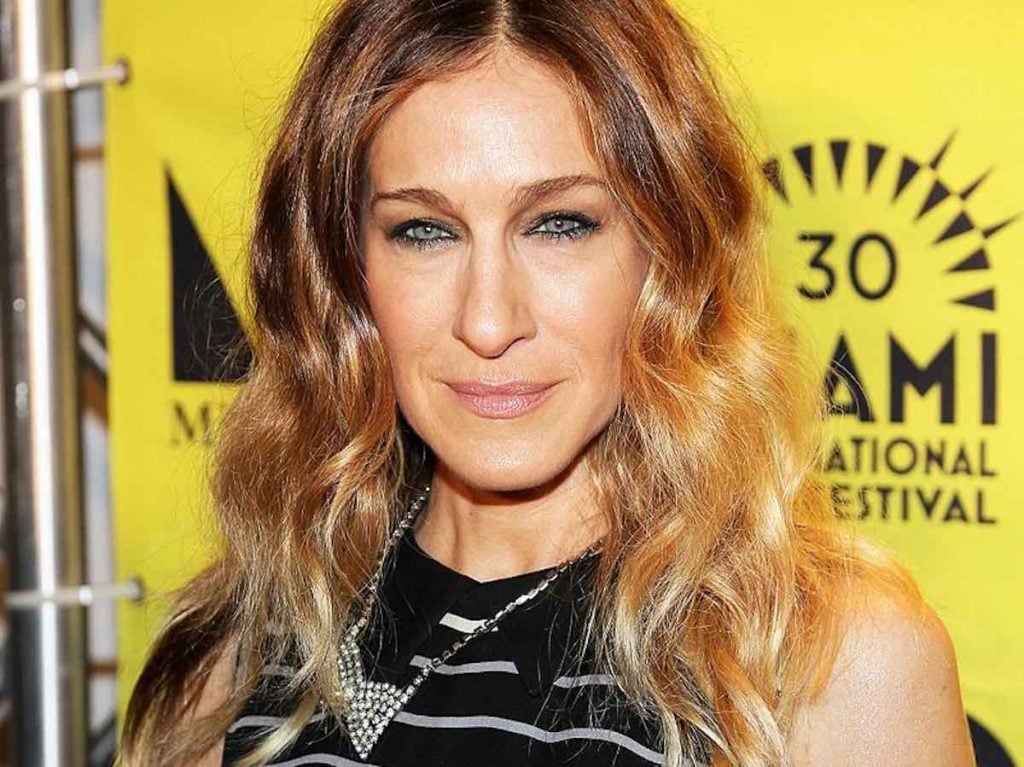 Parker made her Broadway debut at age 11, and three years later was starring in the title role of the musical Annie. She returned to the stage recently starring with her husband Matthew Broderick in Plaza Suite. After COVID-19 caused the closing of the theater, she posted a hopeful message on Instagram.

“Broadway doesn’t stay quiet for long. We will be back. The Rialto will hum. Times Square will hustle and bustle. . . We count the days until the marquees are once again lit. In the meantime, we think of all those affected and hope for everyone’s good health.” WATCH a Plaza Suite interview with the couple… (1965)

The fashionista continues to work in television (Divorce)—and in films such as The First Wives Club, The Family Stone, and Failure to Launch. Yet she is also a fashion designer (SJP shoes and handbags), and she owns a production company called Pretty Matches. – Photo (above) by MiamiFilmFestival

And, on this date in 2009, thirteen Palestinian girls and boys from a West Bank refugee camp traveled with their musical director to Israel to perform for elderly Holocaust survivors.

Most of the audience at the Holocaust Survivors Center did not know the youths were Palestinians from such a rough area until it was announced. Amidst gasps, the orchestra began to play songs for peace, and the audience broke out in applause.  The event was part of “Good Deeds Day,” an annual event at the Center.

And on this day in 1944, a Royal Air Force sergeant survived a jump from 18,000 feet without a parachute. The 21-year-old WWII gunner decided when his Lancaster bomber was on fire, it was better to jump than burn. His fall was broken by pine trees and soft snow and he suffered only a sprained leg. Nicholas Stephen Alkemade was subsequently captured and interviewed by the German Gestapo, who were initially suspicious of his claim to have fallen without a parachute until the wreckage of the aircraft was examined.

He was a celebrated prisoner of war, before being repatriated in May 1945. Reportedly, the Germans gave Alkemade a certificate testifying to the fact, according to Guy Murchie, in The World Aloft.

Happy Birthday to Sir Elton John, who turns 73 years old today. Growing up in London, the singer-songwriter learned to play piano at age three. In his 5-decade career, Elton John has sold more than 300 million records, making him one of the best-selling musical artists in the world.

He has more than fifty Top 40 hits, such as Rocket Man, Tiny Dancer, and Bennie and the Jets, and seven consecutive No. 1 US albums. His tribute single, re-penned in dedication to the late Princess Diana, “Candle in the Wind 1997” sold over 33 million copies worldwide and is the best-selling single in the history of the UK and US singles charts. WATCH a 70th birthday video tribute… (1947)