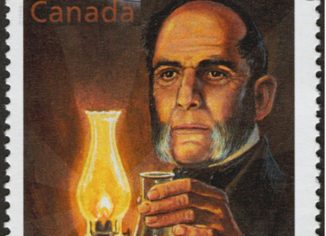 165 years ago today, Canadian inventor Abraham Gesner received U.S. patents for his innovation called kerosene, a cleaner lamp fuel for indoor and street lighting. His invention of the process to refine a liquid fuel from coal, bitumen and oil shale mostly eliminated the use of whale oil from sperm whales. Gesner created the Kerosene Gaslight Company and began installing lighting in the streets in Halifax and elsewhere, and soon expanded to the U.S. where he created the North American Kerosene Gas Light Company. (1855)

He also was an influential figure in the development of the study of Canadian geology and natural history. In fact, he founded “Gesner’s Museum of Natural History”, in Saint John, the first public museum in Canada.

And, on this day in 1976, the first 4.6 miles of the Washington, DC Metro subway system opened. The Metro network now includes six lines, 91 stations, and 117 miles (188 km) of route and is the second-busiest U.S. rapid transit system for number of passenger trips, after the New York City Subway. Its award-winning design came from Chicago architect Harry Weese.

Many Metro stations were designed by Weese and are examples of late-20th century modern architecture with their heavy use of exposed concrete and repetitive design motifs. The clean, graffiti-free stations also reflect the influence of Washington’s neoclassical architecture in their overarching coffered ceiling vaults. Weese worked with lighting designer Bill Lam for the indirect lighting used throughout the system. The design of the Metro’s vaulted-ceiling stations was voted number 106 on the “America’s Favorite Architecture” list compiled by the American Institute of Architects in 2007.

And on this day in 1952, the musical comedy Singin’ in the Rain, starring Gene Kelly and Debbie Reynolds, premiered at Radio City Music Hall in New York City. Directed and choreographed by Gene Kelly and Stanley Donen, the film has earned legendary praise as probably the best film musical ever made. WATCH the unforgettable scene…

Sung by Gene Kelly, the iconic song was written with lyrics by Arthur Freed and music by Nacio Herb Brown