85 years ago today, a black college athlete at Ohio State University set three world records and tied another in “the greatest 45 minutes ever in sports.” At the Big Ten Track and Field Championships in Ann Arbor, Michigan, Jesse Owens ran and jumped into track and field immortality by equaling the world record for the 100-yard dash, and breaking the records in the 220-yard sprint, the 220-yard low hurdles, and the long jump (with a length unmatched for a quarter century).

Owens, the Alabama native who became a four-time gold medalist the following year at the Olympic Games—beating Hitler’s best track stars in Berlin—is often ranked one of the greatest athletes of the 20th century. WATCH a short clip to see why no one could duplicate his feat today… (1935)

And, this 1-minute clip, from the same documentary…

On this day in 1977, Star Wars, the film that heralded a new era of special effects for fantasy-adventure movies, was released. Created by George Lucas, the Star Wars franchise became a worldwide pop culture phenomenon through the merchandising of charismatic saga.  The film was nominated for 11 Academy Awards and won 7, including Best Original Score, by John Williams. Oscar nods included: Alec Guinness nominated for Actor in a Supporting Role, George Lucas for Director; other nominations for Makeup; Sound Editing; Screenplay; and Best Picture. The film won the award for: Art Direction-Set Decoration, Costume Design, Film Editing, Sound (Mixing), Visual Effects, and a Special Achievement Award for its Alien, Creature and Robot Voices.

And, on this day in 1935, in the waning days of his career, a 40-year-old Babe Ruth had been dragging down his team with lousy fielding, sluggish running, and spotty hitting. This day, however, he hit three monster home runs in a single game. The next week he retired. 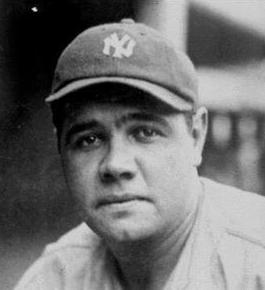 He proved himself the ‘Sultan of Swat‘ when he hit a ball so perfectly it soared over the mammoth right-field roof of Forbes Field, a feat no one else had ever achieved — a “prodigious drive” estimated at more than 500 feet. It was his last home run. It topped his lifetime tally at 714 and set a baseball record that stood for 39 years.

Also on this day in 1953, the first public television station in the U.S. officially began broadcasting as KUHT from the campus of the University of Houston in Texas.

Established by Dr. John C. Schwarzwalder, a professor in the Radio-Television Department, it was the first station to broadcast under an educational non-profit license in the country. As an NET member station (National Educational Television), which eventually merged into PBS, the station offered televised college credit classes. Running 15 hours weekly, most courses aired at night to serve students who worked during the day.

And, on this day in 1969, Midnight Cowboy premiered in theaters, starring Jon Voight and Dustin Hoffman. It won a plethora of awards including Academy Awards for Best Picture, Best Director (John Schlesinger), and Best Adapted Screenplay. The depressing plot centers around a Texan ‘cowboy’ who travels to New York City and ends up homeless with an ailing con man (Hoffman) teaching him the how to become a hustler.

(You might have heard a pedestrian call out in a Bronx accent if a car gets in their way, the now-famous expression from the movie, “Hey, I’m walkin’, here!”)

Midnight Cowboy, notable as the only X-rated film ever to win the Best Picture Oscar, is often listed in the top 100 greatest films of all time. Fred Neil’s theme song Everybody’s Talkin’ won a Grammy Award for vocalist Harry Nilsson. WATCH the trailer…