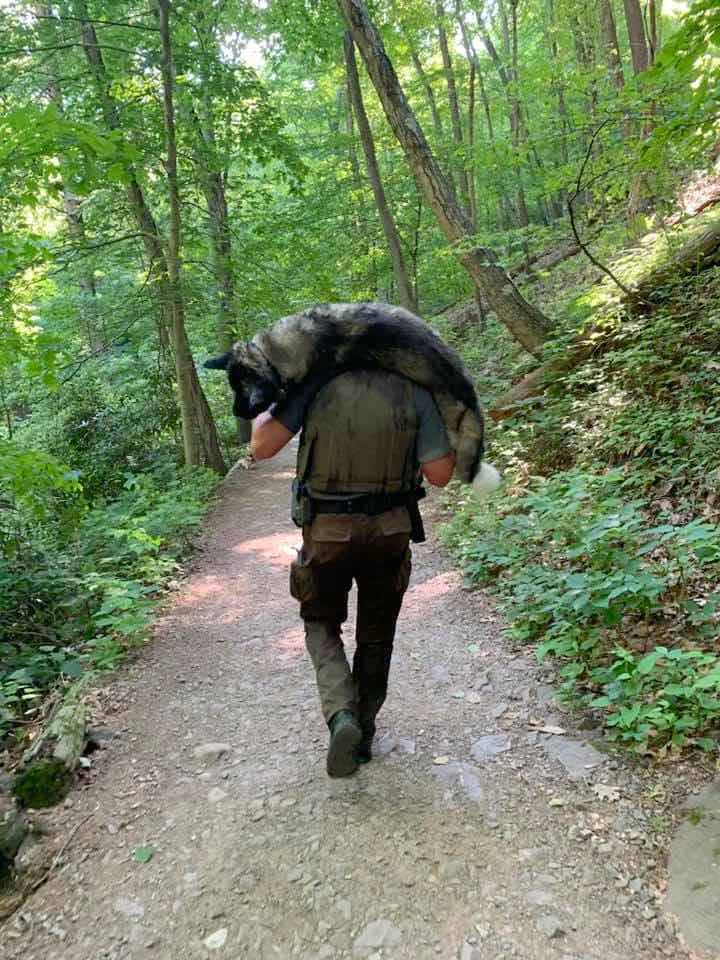 The temperature was rising to 90 degrees on Tuesday in the mountainous hills of the Delaware Water Gap National Recreational Area, when Lexie Daniel and her friends witnessed a heroic act of kindness to save a dog’s life.

Lexie and her fellow hikers encountered a man whose dog was severely overheated. Even though they donated their water, the group was afraid that it wouldn’t be enough to sustain the pup, after seeing how much the dog was already struggling.

“The owner brought along a huge jug, but no amount of water seemed to be helping,” Lexie told GNN.

Too tired to carry the dog himself, Lexie said ”the loving owner called the park rangers ASAP,” and reported their location on Mount Tammany.

Kris then lifted the huge dog onto his shoulders and began carrying him down the mountain.

“It was a LONG distance—a couple miles down an incredibly rocky path,” says Lexie.

When they reached the stream, Kris “laid him in the water as he knelt beside him and poured water on him.”

“The ranger then picked him back up over his shoulders and walked all the way back down to the street.”

“He must’ve been on his shoulders for about an hour, it was a long way down!” Lexie said via text message.

Lexie’s cousin Tori Matyola said, “The owner hiked down ahead of the ranger so that once he got down the mountain he had the car ready to take him straight to the vet.”

“The dog was looking a little better by the time he got to the car and picking up his head.”

When she got home, Lexie, a pediatric nurse from Hackettstown, New Jersey, posted the good deed on Facebook and it went viral with 35,000 people sharing the post and showing admiration for the ranger.

“This is a HERO,” Lexie wrote. “We are so lucky to have rangers like this (who) put even animals before themselves. This ranger deserves insane recognition and a standing ovation for his bravery, selflessness, and strength.”

Lexie updated her post by saying the ranger had been in touch with the owner of the pup who said the patient is doing fine, making a full recovery.

“Thanks to this ranger and other officers like him, we can feel a little safer for our loved ones (even our pups)”