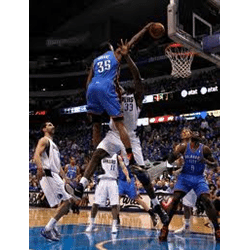 Kevin Durant is 6 foot 11 with a huge wingspan.  When you couple that with his speed, agility, and a 34 inch vertical leap, he is almost impossible to stop on the basketball court.  Not only can he slash to the rim, he is a fantastic shooter from the perimeter as well.
Kevin Durant has won many awards throughout his basketball career such as 3 NBA scoring titles, NBA Rookie of the Year, 4 All Star Teams and an Olympic Gold Medal.  The only award that has alluded him so far is the coveted NBA title.
Kevin is a fierce competitor and he is fierce in his workouts as well.  We are going to take a closer look at the career of Kevin Durant and exactly how he trains to help him achieve a nice vertical leap.
Improve your vertical leap by using the EXACT SAME workout routine as Kevin Durant!

Kevin Durant was born on September 29th, 1988 in Washington D.C.  He has one sister and two brothers.  Kevin started playing basketball at a very early age.  In fact, he played AAU ball with two other NBA players, Michael Beasley and Ty Lawson whom Kevin is still friends with.  While he was playing AAU basketball he began wearing the number 35 which has significance to him.  He wears the number in honor of his AAU Coach Charles Craig who was murdered at the age of 35.
Kevin Durant continued his success throughout high school.  He played for 3 different schools during his high school career and he won many awards including The Washington Post Basketball Player of The Year, McDonalds All American, and the MVP of The McDonalds All American Team in 2006.
After high school Kevin Durant attended the University of Texas and he had an immediate impact on their organization.  He averaged 25 points, 11 rebounds and 1.3 assists per game.  He was the first ever freshman to be awarded the Naismith College Player of the Year.  Kevin’s stint at the University of Texas was short lived, since he went into the NBA draft the next year.
Kevin Durant was the second overall pick in the 2007 NBA draft by the Seattle Supersonics, who are now the Oklahoma City Thunder.  Kevin has had an amazing NBA career so far racking up 3 NBA scoring titles, several NBA All Star appearances, and an Olympic Gold Medal.  Along with this, Kevin is one of the most charitable players in the NBA.  He demonstrated this by giving $1 million dollars to the American Red Cross in 2013 for the victims of the Moore tornado.  Foot Locker has released several commercials donning him as “The Nicest Player In The NBA”.
Kevin Durant may be nice but he is very competitive as well.  Any NBA team would be lucky to have him on their roster.
Kevin Durant Vertical Jump Workout
Kevin Durant Vertical Jump Workout

Who Would You Rather Have On Your Team In Their Prime?

Alright, so maybe I can’t get you to a ridiculous jump shot like Kevin Durant, but I can GUARANTEE you that I can help you increase your vertical jump.
When it comes down to it, if you want to improve your vertical you MUST increase your POWER and Explosion. So how do we do this? In short, you need to combine heavy lifting with plyometric exercises. Most of your training should be focused on increasing the strength of your quads, hamstrings, and calves.
However, strength is not the only factor in increasing your vertical. Simply, targeting improvements on your form alone and mastering proper techniques can increase your vertical from 2 – 4 inches!
Also, there are a few commonly neglected aspects of a correct diet which allow your muscle recovery to improve dramatically, and this results in faster gains and greater injury prevention. All of these things can be seen at www.40inchvertical.net
If you are serious about increasing your vertical jump I recommend heading over there to check it out. The training and techniques that I learned at www.40inchvertical.net helped me to improve my vertical from 31″ to 43″.

Still Don’t Believe Me? Ok, Here Is Someone Who Has Had A LOT Of Sucess With Our Program


Watch the video below for one of many impressive testimonials from The Jump Manual.