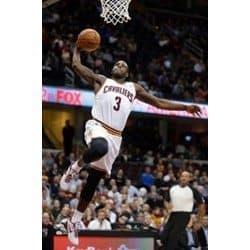 Kyrie Irving is 6’3 inches with a 6 foot 4 inch wingspan and 8-3 standing reaches. When you add his 34.5″ vertical leap to the mix, a next NBA superstar is about to unleash. From his debut in 2011, he made an all-around performance in his basketball career in NBA. He may not be the most explosive point guard like Rose and Westbrook but his ball handling strategy is one of a kind.
He possesses an uncharacteristic skill in shooting and is great on driving a basket.
Despite of being new to the game, Kyrie Irving still prove himself that he has the capacity to be the next NBA celebrity among the young bloods of NBA rookies. Probably this upcoming season, Irving would be included in the playoffs if ever the Cavaliers would be able to make it.
Kyrie Irving vertical leap is impressive. Today we are going to take a closer look at the career of Kyrie Irving and also learn a bit more about his impressive vertical jump.
Improve your vertical leap by using the EXACT SAME workout routine as Kyrie Irving!

Early Life and a Short Biography

Kyrie Irving was born on March 23rd, 1992 in Melbourne, Australia. Having a dual citizenship in the US and in Australia, Irving relocated finally in the United States. When he was a kid, his passion for basketball started. He often visits his dad on some basketball league games and finally inspired himself to play in the NBA when he was in fourth grades after playing in a certain arena. On his teenage days, he played basketball for the Road Runners of the AAU.

In high school, he played for Montclair Kimberley Academy during his freshman and sophomore years then later on transferred to St. Patrick High School for a bigger basketball challenge and was able to lead his team to the New Jersey Tournament of Champions for four years. He played in the Nike Global Challenge in August 2009 leading the USA East to the title of which he was the Most Valuable Player.

January 2010 was when Irving was selected to the Junior National Select Team and played at the following: 2010 Nike Hoop Summit; 2010 McDonald’s All-American Game; and 2010 Jordan Brand Classic and won an award. In June of the same year, Irving became a part of the country’s (which is the United States of America) gold medal winning team at the “FIBA Americas-18 Champions” of which he ranked number one among point guards by ESPNU.

Irving committed to Duke University during his college days and easily became the NCAA Freshman of the Year before entering his career life at NBA.

Who Do You Think Will Be The Next NBA Superstar?

Ok, so maybe I can’t get you to sick handles like Kyrie Irving, but I can GUARANTEE you that I can help you increase your vertical jump.
When it comes down to it, if you want to improve your vertical you MUST increase your POWER and Explosion. So how do we do this? In short, you need to combine heavy lifting with plyometric exercises. Most of your training should be focused on increasing the strength of your quads, hamstrings, and calves.

However, strength is not the only factor in increasing your vertical. Simply, targeting improvements on your form alone and mastering proper techniques can increase your vertical from 2 – 4 inches!
Also, there are a few commonly neglected aspects of a correct diet which allow your muscle recovery to improve dramatically, and this results in faster gains and greater injury prevention. All of these things can be seen at www.40inchvertical.net
If you are serious about increasing your vertical jump I recommend heading over there to check it out. The training and techniques that I learned at www.40inchvertical.net helped me to improve my vertical from 31″ to 43″.

Need Proof?? Brandon Has a 50 Inch Vertical Thanks To The Jump Manual…

Watch the video below for one of many impressive testimonials from The Jump Manual.