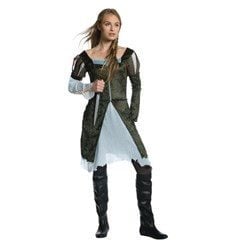 What do you think about the latest Snow White movie, Snow White and the Huntsman? Have you seen it? I watched this movie on DVD and initially I was a bit skeptical of the plot but as the show progressed I ended up liking it! I particularly like Charlize Theron’s role as the witch queen. She is definitely the coolest character in that movie, especially her costumes. But if Snow White is more your thing then perhaps you are considering going as Snow White for a costume party or for Halloween.

Kristen Stewart’s Snow White costume is so much fun in this movie, not girly like the classic costume but more spunky. I love it. This costume doesn’t make you look ‘helpless’ and overly feminine.

There are two versions of this costume on Amazon, for adults and tweens. Unfortunately there are none for younger girls.

Costume for adult. This costume is the one Kristen wore when she was running away from the witch queen. It was originally a dress but the huntsman tore the skirt so that she could move faster.

Kristen wore this costume when she led the army to attack the witch queen. Sword is not included.

Kristen wore this costume when she led the army to attack the witch queen. Sword is not included.

Don’t Like Snow White? Why Not Dress As Queen Ravenna? Or the Huntsman?

The Huntsman Costume
This is my fourth lens on Snow White and the Huntsman costumes series. The first two lenses are about Queen Ravenna’s costume and accessories and the third i…

Like My Product Display? You Can Do It Too!