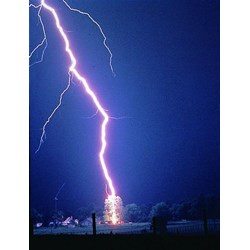 Yes its true, everyone has an experience in one of the areas that cause power outages.  Most have even experienced the power outage that we’re going to talk about.  You know what it’s like to be in a power outage, sometimes more terrifying then others.

My husband is one of those that becomes terrified when the thunder starts clapping and the electricity starts jumping.  He’s terrified that he’s going to get hit by a bolt of lighting.  He might one day, but not today it’s way to hot out.  Not to mention that he’s not likely to be hit by lightening.

But those storms do cause major inconveniences depending on where you live and depending on how prepared you are for them.  Inconveniences are such things as slow and go traffic, minor and major flooding and yes, power outages.  Which is the topic of this Sirgo.

While lightening may not be as unknown as some of the others...
the are big factors in causing power outages!

Ok so you’ve probably figured out that lightening is one of those things that causes power outages and you’d be right.  If lightening hits a transformer, power plant or any number of energy sources, you’re likely to lose your power.  But that’s not all, consider the following items that can also cause you to lose power.

First is a kite.  We’ve all seen them dangling from those high-wires and wondered if they did any damage, and the to that question is yes.  While the smaller ones may or may not have an impact, those that are true kites can and do bring down power lines, short circuit the currents and cause that most unwanted power outage to occur.

Where these outages are likely to occur is also no surprise.  Such places as Chicago, which is all to well known as the ‘windy city’, is also all to well use to the option of having power outages.  With such things as generators in their business and homes, they are more then prepared in tomes of no power.

Animals...
Are often cute and cuddly, but if they’re climbing on you’re power lines…poof can be the end result!

Yes I know they’re cute, my girls and I have stopped many times in the middle of the road to admire them.  But, animals like squirrels on power lines are known to cause those power lines to cause power outages, and that’s not good for fluffy or your home.

While squirrels and other rodents (like rats) are know to walk those balance beams with great efficiency, they’re also to make things go dark.  Often times where there’s a huge infestation of rodents, you’ll see that power company’s have put cones (like they put over dogs ears when they’ve been infected), in order to block rodents from running on the power lines and causing those power outages.

While this one is known, I couldn’t left this Sirgo without mentioning this cause: Car accidents.  When a vehicle hits a power pole, the answer is very likely going to be a power outages.

When accidents occur, the priority of course are those that have been injured, but if it’s night and you have small children that are afraid of the dark, your focus is on them and not the cause.  That’s why it’s important that you as the parent make sure you have options that will help your children stay in the light and not the dark.  Such things as generators, flashlights and candles can help turn a dangerous and scary situation into a time of play and entertainment.

Be Prepared For The Unexpected...
Having a generator (whenever possible), flashlights and candles can aid with the unexpected.