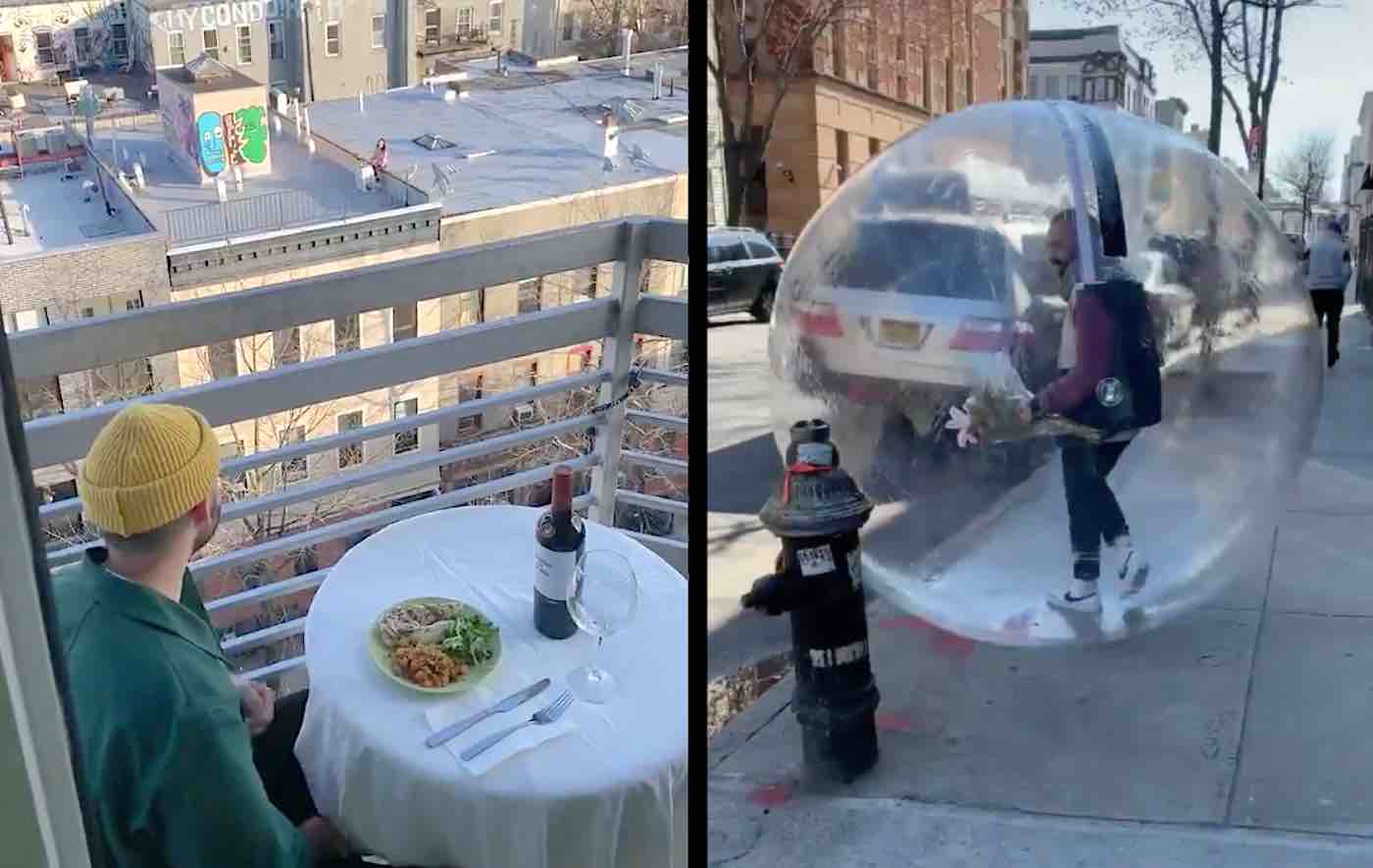 Pandemic or no pandemic, love will find a way—just ask Jeremy Cohen, a quarantined New Yorker who is now dating his neighbor after using a drone to give his phone number to the young woman he spotted dancing on a nearby rooftop.

Cohen, a Brooklyn-based music photographer and filmmaker who has worked with the likes of Miley Cyrus and Lizzo, was just one of millions of Americans twiddling their thumbs in self-isolation last week when he saw an animated figure dancing with gusto on a neighboring rooftop.

“I thought she was really cute from far away,” Cohen told The New York Post. “During this quarantine, I think everyone is fiending for social interaction. I was like, ‘Oh my god, a girl. I haven’t seen one for so long.’”

Cohen then pulled out his phone to document the meet-cute that followed. In a now-famous series of videos, the two neighbors can be seen waving to one another—although the distance between their building made conversation difficult.

Necessity, however, is the mother of invention, and in a flash of inspiration, the video shows Cohen writing his phone number on a piece of paper, taping it to his drone, and using a remote control to navigate the machine through the air towards his brunette beau.

I can’t believe this actually worked and yes this is a real story pic.twitter.com/X5KbBl0qIe

Tori Cignarella, the dancer in question, has also racked up thousands of views since posting her own Instagram post of the quarantine disco.

“I was actually hanging out with my roommate … and I was actually doing the dance from ‘High School Musical,’” Cignarella said, referring to the topically uplifting tune of “We’re All in this Together”.

“I was not expecting to get a phone number out of it,” she added. “We could see his balcony pretty clearly from where we were on the roof and he basically just kind of shouted over to me.”

As he narrated the TikTok video, Cohen admitted that flirting is “normally daunting” for him, but he is also apparently a hopeless romantic—a fact that is clearly evident in the footage that followed.

The second installment of Cohen’s video series shows the couple sharing a dinner date from across the street as they each sit down to an intimate meal, complete with wine and nice tablecloths, on their respective balconies—something Cohen had stealthily coordinated with Cignarella’s roommate.

LOOK: Jimmy Fallon Asks Twitter to Describe Their Quarantine in Six Words—and the Results Are Hilarious

“This date is going really well,” Cohen later confided to his social media followers. “Depending on how long this quarantine lasts, I might just end up in a long-distance relationship with someone who lives across the street.”

The couple can be seen laughing and clinking their glasses over FaceTime—and by the end of the update, Cohen says he has made up his mind. “It’s time to take this relationship to the next level,” he says to the camera, with a twinkle in his eye.

PART 2. Her name is Tori. She’s cute and kind and I’m sor happy I met her pic.twitter.com/tyo0AItBbd