I love costumes! In fact I wrote lots of web pages related to costumes especially the ones that are recently released. Last year I wrote several Squidoo pages (lenses) about this topic and you can find some of them on the links provided at the bottom of the page.

I think Man of Steel costume will be one of the hottest costumes among little kids and adults come Halloween this year. I can foresee the other characters like General Zod, Jor-El and Faora will have their own costumes. Of course these costumes are not available yet but I believe Amazon will start selling them in the coming months, most probably after the movie is released on theaters.

I will continue to update this page from time to time so make sure you bookmark this page so you won’t miss out!

At the meantime I am showcasing some Superman costumes (that are available on Amazon) on this page. Perhaps you want to attend a costume party and dressed as Superman, eh? ;).

Man of Steel Costume for Adults 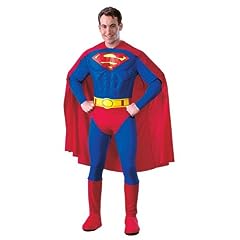 Muscle Chest Superman Costume
No six-pack tummy? Well this costume solve the problem for you. The chest part is already molded with a fake rubber six-pack. Looks hilarious if you are a bit err…chunky…but this costume does look good. According to one reviewer, the colors are very vibrant – red is truly red, blue is truly blue. Available in small (34-36″), medium (38-40″) and large (42-44″) sizes. Click on the button below to read more reviews. 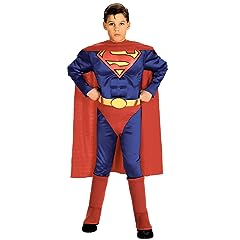 Boys Superman Costume
Cool thing about this costume is that it is available in toddler size. Now that’s what I call the toddler power! Many reviewers commented the quality of the costume is good but the cape might be a bit too heavy for pint size superheroes. The cape can be removed though.

The first costume (on left) is available in kids sizes but last I checked they are out of stock. It comes with belt and boot tops. However, if you think you don’t want to show too much skin (upper chest), there is a second option (on right).

Oz the Great and Powerful Costumes