The Minion costumes for Halloween Parties would be quite popular this year in conjunction with the movie Minions released on 10th July in the USA. Both adults and kids are love to meet Stuart, Kevin, and Bob at Halloween parties.

I am not Minion fans but my son yes. In fact, he is the one who informed us when the movie Minions is going to release and requested to watch the movie at the cinema right after his exam.

And so, I was expected he will request to wear a Minion costume to attend the coming Halloween party.

On this page, you’ll find the standard Minion costume and the outfits which appear in the latest movie.

Did you watch the Minions movie trailer as presented above? My son said the movie trailer is so fun to watch again and again regardless you been watched the movie in the cinema. From the movie trailer, you’ll notice that the Minion costume is almost the same as previous movies. You’ll never go wrong to pick blue suspenders overalls with a yellow long sleeve t-shirt as it is the Minion’s standard outfit. Read more below about Minion Costumes for Halloween Parties. 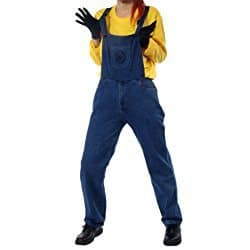 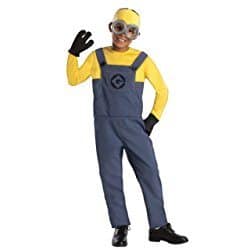 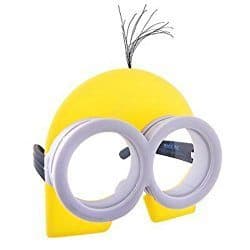 Minion Goggles Costume Glasses Sunstaches
To looks slightly different, I would suggest men consider the appearance of Minions when the moment they begin their journey to find their new boss. What a nice Minion Costumes for Halloween Parties, don’t you think? #CommissionsEarned

As the picture above showed, these Minions wearing a dark brown winter coat. You may take it as a reference and complete your Minion outfits with Minion goggles and mask. To make it a perfect look, you could carry a big backpack.

For those who looking for Minion goggles, you may consider the left-side one. It is great for both adults and kids for the cosplay party.

Could you imagine how fun is it by wearing these Minion Style goggle glasses to join the Halloween trick or treat game?

By the way, if you have time and would like to DIY a Minion costume, then watch and grab some ideas from the following video.