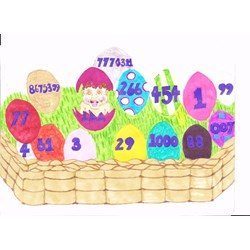 My Eggs are numbered

Thomasina gave birth to a baby girl on April Fools Day. No one knew the baby’s father, nor had any type of information about him. Not even a name. Part of the reason why was because Thomasina moonlighted between two men. Tuesday, Thursday, and Sunday Thomasina saw Paul. Monday, Wednesday, Saturday, and Friday were reserved for Charlie.
Thomasina’s family didn’t know what to expect. Everyone expected the worst this time, because they felt she played with god one too many times concerning birthing decent looking children. However, this time around the family felt her blessings were going to be cut short, with god turning a blind eye.
she took advantage of her blessings more than one too many times. No one knew what she was going to bring home this time. As a result, no one showed up to the hospital nursery. It was no telling what kind of critter she was bringing home. Finally, everyone got a chance to see the new baby.
Everyone except for Thomasina’s two cousins James and Doug, who lived out of state. Both men asked Thomasina’s mother Nancy what the baby looked like, when both men were told the news about the new arrival. There was a long pause on the other end of the phone line when all three were connected three way.
“Uh, let’s just put it this way. You’re just going to have to see for yourselves,” said Nancy. Automatically James and Doug knew something was wrong. Different images flashed before both mens eyes, imagining how messed up looking this baby could be.
“Surely this baby didn’t have three legs and one eye,” said James.
“No. She has everything and they are located in all the right places. When Thomasina comes down there, you’ll get a chance to meet her new bundle of joy she’s so proud of,” explained Nancy.
“Oh, lord. We got a gremlin on our hands. We were hoping for a Mogwai but someone fed it after midnight,” joked Doug.
“You’ll see,” repeated Nancy.
“Yep! It’s a gremlin! exclaimed James.
“Is it at least better looking than Curious George?,” asked Doug.
“I’m going to let you both judge for yourselves,” answered Nancy.
“Alright,” James and Doug said in unison. Two months passed by and Thomasina made it to Jackson, Mississippi. She arrived on James’s doorstep with her new baby.
James held his breath and opened the door. He saw the baby. “Oh, dear,” James whispered softly to himself. The way the child looked was beyond verbal description. He began to think that surely his cousin’s kid was switched at birth. A few minutes later, he received a call from his cousin Doug.
He walked to the very back room where Thomasina wouldn’t hear what was said about her beauty challenged child. “Well, what do you think?,” Doug asked.
“Only time will tell,” said James.
“Oh, no. It’s worse than I thought,” said Doug.
“Her true features haven’t come out, yet,” James commented.
“And when they do, lord help us,” said Doug.
“Yeah, that’s true. You know daddy’s side has never been blessed with looks. Not even charm,” said James.
“But how do they get women to marry them?,” asked Doug.
“That will forever be a Williams family mystery,” replied James. Two days later James and Doug met the father of the baby. Both mens’ eyes began to water.
“Well, it looks like Chewbaka brought Cornelius to the after party!,” exclaimed Doug. Six months later James received a phone call from Nancy. ” What happened?,” asked James.
“You should have seen Thomasina’s face when she brought that baby home. She thought it was going to be Charlie’s baby, not Paul’s,” explained Nancy.
“Good god that’s bad! I can’t claim that as my relative! It may take some years before this really sinks in. I’m traumatized. Well, how does she look, now?,” asked James.
“It has teeth,” replied Nancy. James had his phone turned on to speaker while Doug heard this conversation in the living room.
“I told you that Mogwais are never to be given food after midnight,” said Doug.
“I thought that was the rule of a Chia Pet,” said James.
While both guys conversed about the new baby of Thomasina’s, Regina, Doug’s fiance walked into the living room to stand beside Doug. On her way to stand beside Doug, she glanced at the picture of Thomasina’s new baby on the living room wall.
“Good lord!,” exclaimed Regina. “Your side of the family looks like everyone was hit with an ugly stick! I’m scared. Your family members look like gargoyles,” Regina continued.
“That’s only on my daddy’s side,” explained James.
“I’m going to have to move on to someone else because my eggs are sensitive. I’ve seen better on Mr. Potato Head! My eggs are numbered and I sure can’t afford to mess up!”