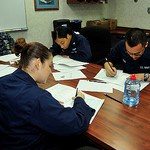 Before the ASVAB Test

Although it was a year ago, I feel as if it was just yesterday that I was waiting in line at the testing center, ready to take the Armed Services Vocational Aptitude Battery (ASVAB) test. I studied for a week and literally memorized two ASVAB prep books and thought I was more prepared than ever. Of course I was nervous, but it was regarding my test results. I was nervous because I didn’t know what was going to take place at the testing center.

Prior to entering the military, there are countless of false information floating around that you ultimate believe. I read that they yell at you at the testing center and make you do push-ups, but that was not the case. Yes, I did get yelled at, but that was because I had on earrings. I had no idea that I wasn’t allowed to wear earrings at the testing since my recruiter never mentioned anything of that nature.

When the recruiter yelled at me about my earrings, I felt disrespected. If he wanted me to take my earrings off, he could politely ask me to do so. None of the other recruiters yelled at anyone because we weren’t in boot camp. He also yelled at another gentleman for leaning against the wall. I immediately thought “is this boot camp or the testing center.” I really thought he was trying to intimidate us, but it wasn’t working. He was just coming across as a pompous individual that needed to relax. I mean, we were only there to take a test.

When it was my turn to turn in my documents (identification and an envelope with my test information on it) to one of the sergeants, he checked it and sent me to another line. The other line was to show our documents to the instructor. Once I showed him my documents, I had to say aloud my social security number and answer two or three questions. He then told me to get two pencils, a test book, scrap paper and he directed me to a seat in the class. It was so quiet in the room that one could hear a penny drop. That is one of my pet peeves – a quiet classroom.

Although my recruiter told me to eat breakfast, I didn’t. I was too anxious to find out what would transpire at the ASVAB testing site that I didn’t have an appetite, but I regretted that later. When everyone entered the classroom and began testing, I felt my stomach getting hungry, which worried me. When my stomach starts growling it is hard to concentrate, and that is exactly what happened. My stomach wasn’t the only one growling, there were several other people in the room with their stomach growling.

It was a four hour test – possibly thirty minutes longer – and we didn’t have any breaks. The instructor said if we needed to use the restroom we may do so, but he wasn’t going to wait on us. If it was time to start another section of the test, he will continue o, and if you get out of your seat, you cannot return to same section of the test book and continue your work. If you didn’t finish, I surmise that is your problem. But only one person went to the restroom, but she finished the section before everyone else. Before you start thinking he was a mean instructor, he wasn’t. He was very nice and polite, but that was just the rules.

During the test, I noticed something. None of the material that I studied was on the test – nothing! It was as if I studied for nothing. I studied one of those outdated ASVAB test on the web that you can download for free. I tried my best not to spend any money, but I shouldn’t have done that because all of my long hours and late night studying was in vain. I would strongly suggest purchasing one from a store or online in lieu of trying to save money and downloading a free one because they are usually they are obsolete. Luckily for me, I passed the ASVAB test my first attempt. If you are lucky, your instructor will grade them and let you know right there if you passed. I believed there were 24 students in the classroom and only three people passed, myself included. I was elated to hear that news because I could move to the next process, which was Military Entrance Processing Station (MEPS).

Why I Chose Not to Join the Army

Unfortunately, I never made it to MEPS. A week after I took the test, I received a missed call from my recruiter about a job opportunity. When I returned his phone call, the job opportunity was gone. He informed me that it was imperative that I am next to the phone so that when a job opportunity comes, I will be able to take it. He couldn’t just sign me up for a job without my permission, so he needed me to be available at all times. That was an opportunity that I couldn’t get back. Weeks went by and still there weren’t any jobs available. So, he concluded that I would need to retake the test to increase my chances of having jobs available. I wasn’t too fond of that idea. Studying for hours and staying up late nights again didn’t sound ideal. As the time ensued, my interest in enlisting the army began to change.

Before I studied and took the test again, I had to ask myself is this what I really want. Am I going to put in the hard work to ensure that I am a soldier in the army?  After deliberating, I realized this isn’t something I am willing to work hard for. I didn’t have the passion to join the army and I was going through a tough time in my life; therefore, I wasn’t thinking rationally. I had never thought of enlisting in the military because I’m not into boot camp, living with hundreds of women, showering with other women, being naked in front of people, using the restroom in front of people, etc. I couldn’t do any of that, and to get out of my comfort zone just to get $1,200 per month was something I didn’t want to take.

Yes, the income will increase over time, but not a lot; unless you are a recruiter or have a degree. Joining the military can be very dangerous. I have a lot of family that was in the military and I remember how badly they wanted to get out. There was a complete stranger that sent me a message on Facebook when he found out I was enlisting in the military. He told me that it’s a great thing that I want to join the military and serve our country, but it’s not all of what it seems. He was in the military with one year left into his four years and he couldn’t wait to get out. He informed me that they kept sending him to Afghanistan and he was fearful of his life. Reenlisting wasn’t an option for him because he wanted to be around for his two year-old son.

When you enlist in the military you never know where they are going to send you. My recruiter once told me that he was deployed to a country where people would urinate and release feces in front of you in lieu of going to the restroom – rules weren’t enforced. I was afraid that I would be the one being deployed to these countries and was in fear of my life. I didn’t think it was worth it. I took a huge risk because I didn’t have a job and didn’t know what the future because I live in a small town where job opportunities are scarce. Through the grace of God, I am now working from home as an instructor, self-published author, freelance writer, internet/affiliate marketer, and internet entrepreneur. My choice not to enlist in the military was the best decision I ever made and I don’t regret it. I strongly believe that I would have regretted it had I enlist because that lifestyle isn’t for me.