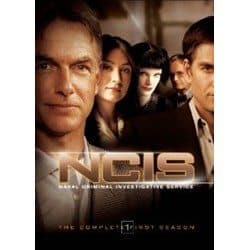 I am sure there are quite a few reviews out there about NCIS but I have to give my opinion on it too.

It’s no secret that I have been a huge fan of Mark Harmon for many years ( Mark Harmon Does It His Way ) and when NCIS came on, I consider it the best show ever brought to TV.

A lot of people think I am morbid for being so interested in forensic
shows and crime drama shows but it’s not about the crime, it’s about the
technology of solving the crimes and some cases are as old as 30 years
and more.

Mark Harmon (Leroy Jethro Gibbs) – the lead Special Agent of NCIS in
Washington DC has a job to do and he will get it done; one way or the
other. Keeping his team in line is somewhat like babysitting at times
but he does find humor in some of the situations they get themselves in.
The “head slap” gets them back in line but it’s done with “love.” LOL

Michael Weatherly (Special Agent Tony DiNozzo) – Tony, as one character
described him, “Tony, you are almost as good-looking as you think you
are.” No doubt Tony is good-looking, a flirt and can be irritating and
arrogant at times with his “movie references” but ya gotta love him. He
is good at what he does and watches out for the team.

Pauley Perrette (Forensics Specialist Abby Sciuto) – Who would have
thought someone like Abby, fan of goth and sleeps in a coffin would be
the absolute BEST Forensics Specialist? Abby loves what she does and is
somewhat the “baby” of the team but also is the one to get the team
family back together when needed. To Abby, the NCIS team IS her family
and no one is going to mess with them.

Sean Murray (Special Agent Tim McGee) – McGeek, as Tony calls him was
not meant to be a field agent in the beginning but along with his
superior computer skills and under the guidance of Gibbs, Timothy McGee
has found his place as a Special Agent in the field and no longer
referred to as “proby,” at least not as much.

David McCallum (Chief M.E. Donald “Ducky” Mallard) – Or as better known by many
as The Man from U.N.C.L.E. TV series that ran from 1964 to 1968. “Ducky”
is the lovable medical examiner who goes the extra mile to find the
answers that Gibbs and the team needs to solve a crime. I think Gibbs
sometimes gets irritated when “Ducky” goes off on his stories but they
are interesting at times.

Brian Dietzen (Asst. M.E. Jimmy Palmer) – Jimmy or Palmer as some call
him, strives to learn and be just like Ducky. He takes his job very
serious and one day dreams of being the Chief M.E. Palmer is from a
small hometown and often writes home about his adventures with the NCIS
team. One such letter to home, he was able to tell the story of how he
was able to stop a killer who had already killed and attempted to kill
him. Gibbs was very angry at him for not following orders but proud of
him at the same time.

Cote de Pablo (Special Agent Ziva David) – Replaced Special Agent Kate
Todd after she was assassinated by Ziva’s half brother. Ziva started out
as an Israeli citizen, agent of the Mossad, who later decided to become
a US citizen. Ziva can be dangerous when she needs to be but soon
became a trusted member of the team when she shot her half brother in
order to save Gibbs. Ziva is a special character and we will miss her
“Zivaisms” as they have been called when she would mix up popular quotes
and sayings, such as:

Ziva will be missed. It has been reported that she left to have her baby. I would like to think that she will come back one day.

Rocky Carroll (Director Leon Vance) – He came on board after the death
of Director Jenny Shepard (played by Lauren Holly). Leon and Jethro have
a history together from way back. It seems like sort of a love/hate
friendship but they do respect each other and look out for each other.

It really breaks my heart to see the re-runs of losing Special Agent
Kate Todd and Director Jenny Shepard). I try to avoid those particular
episodes.

Ok, now you know I am truly an NCIS fan. If you are not maybe you will be after reading my review.

Build Your Collection of NCIS Seasons