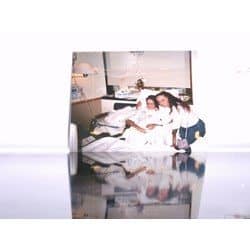 Cake and icecream too

It is great to be rewarded of working hard to reach the top, to be successfully financially stable. Working in private care, I can look back to a time where I was sent to a home to care for a man patient who had had cancer. We will call him Charlie. Charlie was very successful, lived in a big beautiful home and own few car businesses.

He had a lovely wife and two children. A son and a daughter. He also was grandfather. Charlie was laying in bed in a coma. He was diagnose with cancer. It was my first day being the nurse that his wife requested to have a nurses come in to their home. I was scheduled to go to Charlie’s. Well I was there no more than an hour. I did my job description that was my job duties to do as his nurse. I walked back to the bedroom where they had Charlie in a room laying in hospital bed. His wife introduce me to her husband. Charlie was in a coma. Even though people are in coma’s I believe they still can hear the sound of one’s voice, the softly touch of their family.

So when I sit by Charlie’s bed, I would talk to him. Before his passing I said to Charlie to open his eyes so I can see what color his eyes were. He turned his head and looked straight at me and opened his eyes. By the ways the color of his eyes were hazel. He taken his last final breath and died.
His children and wife were all there at his bedside. He is survived by his wife and son and daughter and his father or father-in-law it may have been. Charlie lived a full life according to what his wife stated. I called my supervisor to make my report that Charlie has passed away at 10:45 Am. She made the arrangements to call the undertaker who else she had to call to have Charlie’s body transfer to the funeral parlor. Before they arrived the family had time to say their last goodbyes.

I walked out to the living room of Charlie and his wife home so the family could have some alone time to say goodbye to their father, her husband. As I was sitting there Charlie’s son walked out and we got into a conversation. He was sharing his grief and angry that he had with his father. His son was very angry at his father because his work was more important than being with his family. He was reminiscing of the times his father never showed up at his football games, missed his graduation, and other events because of his time he rather spend at his job. His son made a statement, that his dad made enough to live comfortably but that was not enough. He continue to buy businesses and spending long hours at his businesses. Neglecting his family, his children. I listened to his grief. It made me realize how important my family meant more to me than becoming successful. Some does want their cake and icecream too and even more because once they have gotten the taste of successfulness it made only more hungry to want more even if it is the sacrificing of losing their families.

I had to work to support my family being a single mother at the time but I would not allow my job be first priority. My children came first and spending quality time with them is more rewarding than being successful. I am not rich, I don’t big bank account nor live in a fancy home or wear expensive clothes. I have more than money can buy. I work for pennies but after hearing Charlie’s son’s testimony it has only open my eyes what is important in life. Creating memories with my family.