Are you looking for a great waitress costume but want
something a little different; something a tad off the beaten path?
Perhaps you are attending a Renaissance Ball or Oktoberfest themed event
this year? If so, a pirate wench costume may be just what you have been
searching for!

In today’s lingo, the word wench can sometimes be perceived as
something negative. Underground hip hop stars throw this term around
loosely trying to insult and demean women while the feminist movement
would have us remove it from the dictionary altogether.

The term ’wench’ is simply a word that describes a young woman whose
job it is to serve food and beverages to paying customers at local inns
and taverns. Known for their sensual, flirty personalities, wenches are
often erroneously thought of as uneducated, or even dumb.

This is exactly what she wants you to belief. That way it is much easier to help relieve you of most of your hard earned money. 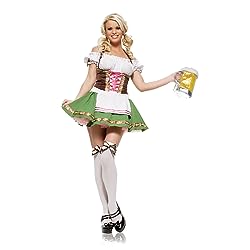 Halloween is a great time to have a party. This year, why not host your own instead of attending someone else’s festivities.

As the hostess of the party it would be fun to dress in a sassy, seductive, and sweet tavern wench costume. Available in just about any color, shape, style and size these amazing wench costumes will have girls and women from petite teens to plus size adults looking and feeling like a million bucks.

Most people tend to break tavern wench costumes down into two basic styles; a beer girl costume or a medieval wench costume.

A sexy beer girl costume is the type of waitress outfit that you would expect to see at Oktoberfest. Drinking a cold frosty beverage is certainly not the only thing only the customer’s mind while flaunting this sexy waitress costume. 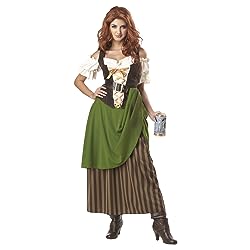 During the Renaissance men and women began taking a closer interest in more intellectual pursuits such as art, literature, science, politics, and religion.

It was basically a cultural movement that began in Italy and quickly spread to the rest of the European world! As the culture improved so did the clothing that was worn. Women began wearing more regally inspired outfits that were fit for a queen.

Popular festivals, such as Carnival, gave rise to an increase in festive masquerade balls and other events where masks and gowns were traditionally worn by invited guests.

Influential writers of the day, such as William Shakespeare, help to further define the stereotypical renaissance wench costume.

Elizabeth I and Anne Boleyn are fine examples of the style of dress that would look incredible at your next Renaissance Fair or Event!