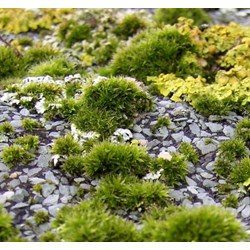 Roof Moss-It’s not a Rooftop Garden!

There are many quaint pictures of the English countryside of homes with moss covered roofs. The truth of the matter is, however, that moss can severely damage not only the roof, but an entire home! In many areas, it is a real problem. Some homes have only a small amount, at least at first. For some homes though, the roof moss is very obvious and can cover almost the entire roof. This is one reason that roof inspections and cleaning should be done at least twice a year. Spring and Autumn are perfect times to accomplish this task.

Being a roof moss removal Portland business, we are very familiar with how much, and how quickly roof moss can grow! It is very common in this area, as well as other places in the United States, and the world. Roof moss requires moisture to grow and reproduce, and there is always a lot of that in the Northwest.
It commonly begins in between the roofing tiles, and quickly spreads. It can actually get started in any tiny crack or crevice in the roof. By the time a homeowner realizes they have it, it may have already done some damage. This is why the roof should be cleaned and inspected at least twice a year. It is relatively inexpensive compared to the price of a new roof.
Once roof moss attaches to the roof, it can be very difficult to dislodge. While this moss does not have “roots”, it does have rhizoids, which are very much like roots. They hold the moss onto the roof with a considerable amount of strength. Using the normal force of a garden hose may not be enough to dislodge roof moss.

Many Methods of Roof Moss Removal

Just as there are many different types of roof moss–there are many different methods to remove it. Don’t let anyone tell you that there is a “standard method” of roof moss removal, because there is not! Using the wrong method will not only be ineffective in removing the moss, but could damage the roof as well. Roof moss removal is a job for the professionals, unless the homeowner is experienced in doing it. It is important to know which type of moss it is, as well as which type of removal method works best.
Here are some of the methods which may be used for removing roof moss:

There are other methods as well, but this shows that there are indeed many different methods of roof moss removal.